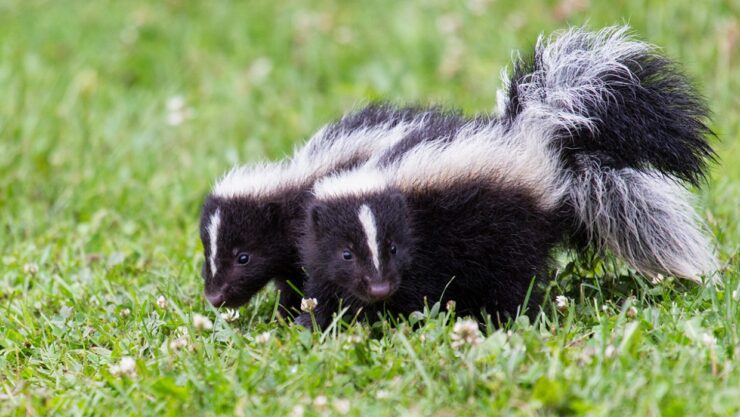 Skunks are mammals with black-and-white fur. World wide there are 11 species of skunk. Two skunk species inhabit Indonesia and the Philippines, the other 9 live in North and South America.

Skunks vary in size from just over 1 pound up to 10 lbs. Although the most common fur color is black and white, some skunks are brown or gray, and a few are cream-colored. All skunks have stripes. They may have a single thick stripe across back and tail, two thinner stripes, or a series of white spots and broken stripes.

Muscles located next to the scent glands allow them to spray 7 to 10. The smell aside, the spray can cause irritation and even temporary blindness, and is sufficiently powerful to be detected by even an insensitive human nose anywhere up to a mile downwind.

Skunks use the spray when they feel threatened but prefer just to warn potential attackers first. They only have so much of the weapon and prefer to conserve it if possible. If they happen to use up all of the spray then it will take about ten days to produce another supply. Their distinctive black and white appearance is to advertise what they are and hopefully that will be enough to deter attackers.

Before resorting to spraying a skunk will go throug threaten with hisses, body position and stomps, only then will it unlease its weapondry. An interesting note is that skunks will not spray each other during fights. The only exception is when males compete during mating season.

Man and the great horned owl or the only predators that regularly kill skunks. The other predators have more sense! hehe

Removing the scent from objects or creatures can be difficult. Some home remedies suggest using tomato juice, beer or vinegar. A more complex and effective remedy includes application of a mixture containing hydrogen peroxide, baking soda and liquid soap. Hydrogen Peroxide however is the best solution to such a stinky problem.

Skunks are nocturnal, and are solitary animals. During the day they shelter in burrows that they dig or in other man-made or natural hollows that they may come across.

Skunks do not hibernate in the winter they do move around on a much less frequent basis. They often huddle together for warmth but only one male and multiple females. The same winter den is often repeatedly used whether under a house or in a tree.

Although they have excellent senses of smell and hearing they have poor vision. They cannot see objects more than about 9 feet away with any clarity. Automobiles account for nearly half of all the skunks that die each. Hunting, trapping and poisoning account for some of the deaths also. Other natural causes account for the bulk of the non-car related deaths.

Skunks are second only to raccoons as reservoirs of rabies. Despite the large number of carriers of rabies in the raccoon and skunk populations it is very rare for a human to get rabies from either.

In case of a skunk bite, follow these directions as a precaution against rabies or other infection. (If a situation with a biting animal is out of control, call emergency services immediately.) If possible without further injury, retain the skunk, dead or alive, to assess and prevent the risk of spreading disease – if the animal is dead, place on ice or refrigerate. Wash the wound thoroughly with antibacterial soap and water. Place pressure to stop any bleeding. See your doctor or emergency medical services as soon as possible – within no more than 72 hours, and sooner depending on the severity of the wound or any difficulties in stopping bleeding. Call your local animal control agency to take the skunk away. Ask to have it tested for rabies. Once a doctor has looked over the wound, ask if a tetanus shot is necessary or recommended (tetanus vaccinations are typically good for ten years). When the test results are finished on the skunk, you will be told if you should get the rabies vaccine or not.

Skunks are omnivorous, eating both plant and animal material but mostly meat. Skunk feed heavily on insects and their larvae and earthworms as well as small rodents, lizards, salamanders, frogs, snakes, birds and eggs. If animal food is hard to come by then they will concentrate on wild fruits and large seeds or garbage.

Breeding usually takes place in early spring. Female skunks are induced ovulators, the male skunk mounts the female from behind and proceeds to bite the female on the back of the neck and back, which induces the female’s ovulation. Females excavate a den ready for between one and four young to be born in May. The male plays no part in raising the young and may even kill them. Baby skunks are called kits. The young disperse after a couple of months to fend for themselves.

Striped skunks were once a commonly traded in the fur trade up until the late 1950’s. Today low pelt values limit their importance today. Skunks are easily trapped but few are actually targeted by trappers today. Most of the skunks trapped are trapped as nuisance animals. Skunks are occasionally shot by squirrel and raccoon hunters.