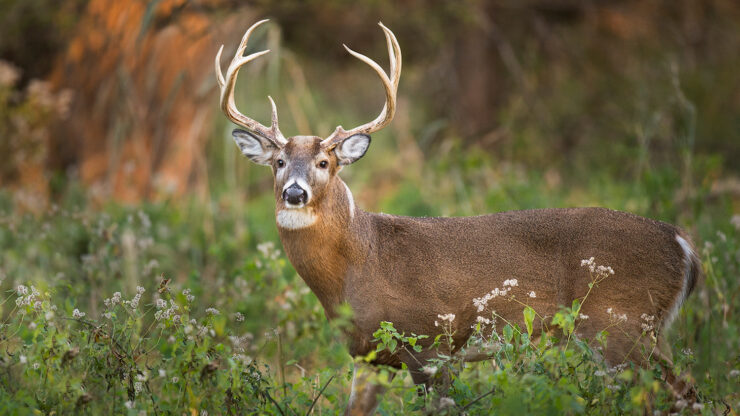 This beautiful buck was taken by Harlan Swehla during Iowa’s 2002 bow season. Harlan Swehla and his friend were hunting near each other and both witnessed the buck before during and after the shot. This incredible buck sported 22 pointers and scored an incredible 240 points gross Pope and Young with a net of 237 6/8.

They had spotted this monster Iowa buck a couple of times prior to the Iowa bow season opener, but only from a distance and didn’t realize exactly how big it really was!

On the fateful day Harlan and his friend Ken were both in their stands before 3 pm. The day provide eventful as Harlan watched 3 small bucks feeding in the harvested corn field. Suddenly at about 4 a doe in heat runs right past Harlan’s stand, then Harlan can here a few grunts coming from within the woods where the doe had just run from. Then the record book Iowa buck shown in the pictures steps out of the woods and into the corn field. As luck would have it the monster buck walk the field edge instead of the same path that the doe took. This put the Iowa buck within shooting range of Harlan.

Harlan put an arrow through the bucks chest and the buck didn’t run but simple walked away into the field. The buck still in full view began to show signs of the hit. Eventually the buck turned around and walked right back past Harlan and into the woods where he lay down.

The buck went behind some brush about 30 yards behind Harlans tree and lay down. Harlan and his hunting buddy returned later after dark and retrieved the buck.

The buck as it turns out placed as the third largest non-typical ever taken by bow in Iowa. 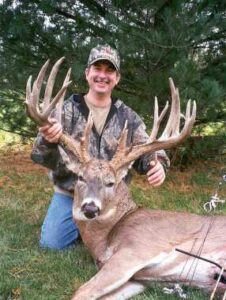