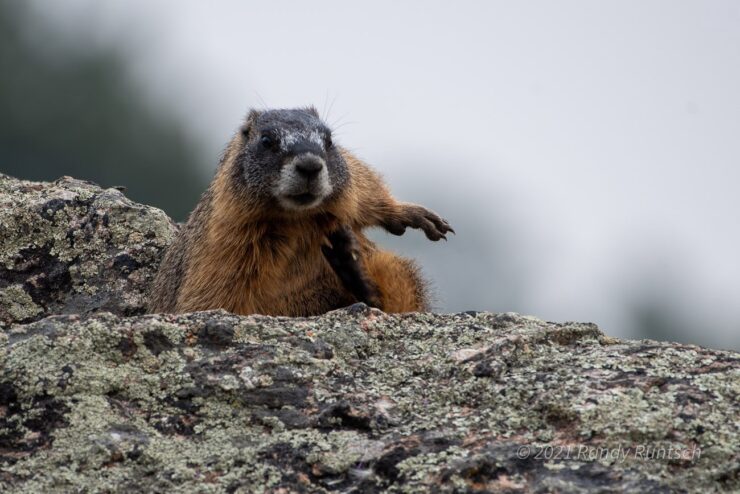 Marmots are members of the squirrel (rodent) family. They are sufficiently different for our purposes to differentiate them from ground squirrels. You can think of a marmot as a large plump ground squirrel.

Marmots usually live in mountainous areas. Marmots live in burrows, and hibernate there through the winter. Most marmots are highly social, and use loud whistles to communicate with one another, especially when alarmed.

There are a number of marmot species world. The rest of this article will focus on these species of North America: Hoary Marmot and the Yellow-Bellied Marmot.

The Hoary Marmot (Marmota caligata) inhabits the mountains of northwest North America. The largest populations are in Alaska. In the northern part of that state they may live near sea level, elevation increases the further south in their range you go. Hoary marmots live near the treeline on slopes with grasses and forbs to eat and rocky areas for cover. It is the largest North American ground squirrel.

The “hoary” in their name refers to the silver-grey fur on their shoulders and upper back; the remainder of the upper parts are mainly covered in reddish brown fur. The underparts are greyish. They have a white patch on the muzzle and black feet and lower legs.

These animals hibernate 7 to 8 months a year in burrows usually among and under boulders. Mating occurs after hibernation and 2 to 4 young are born in the spring. Males establish “harems”, but may also visit females in other territories. Predators include golden eagles; grizzly and black bears; and wolves.

Unlike most animals their size, hoary marmots are not shy around humans. Rather than running away at first sight, they will often go about their business while being watched.

The Yellow-bellied Marmot (Marmota flaviventris), also known as the “Rock Chuck”, lives in the mountains of the western United States and Canada, including the Rocky Mountains and the Sierra Nevada. It inhabits subalpine and alpine regions, typically above 6000 ft of elevation. Yellow-bellied Marmots usually weigh between 5 and 11 pounds when fully grown. They get fatter in the fall just before hibernating. A marmot’s habitat is mostly grass and rocks with few trees. Their territory is about 6 acres.

Predators include wolves, foxes, and coyotes. When a marmot sees a predator it whistles to warn all other marmots in the area. Then it typically hides in a nearby rock pile. Marmots start reproducing when they reach 2 years old. They live in groups of about 10 to 20 individuals. Each male marmot digs a burrow soon after he wakes up from hibernation. He then starts looking for females and by summer has 1 to 4 females living with him. Litters usually average 2-5 offspring per female.

Yellow-bellied Marmots are diurnal meaning most active at dawn and dusk. The marmot is also an omnivore, eating grass, leaves, flowers, fruit, grasshoppers, and bird eggs.

Marmots very commonly hunted for sport although a varmit hunter will take one from time to time but they are sometimes killed by farmers who may view them as pest.