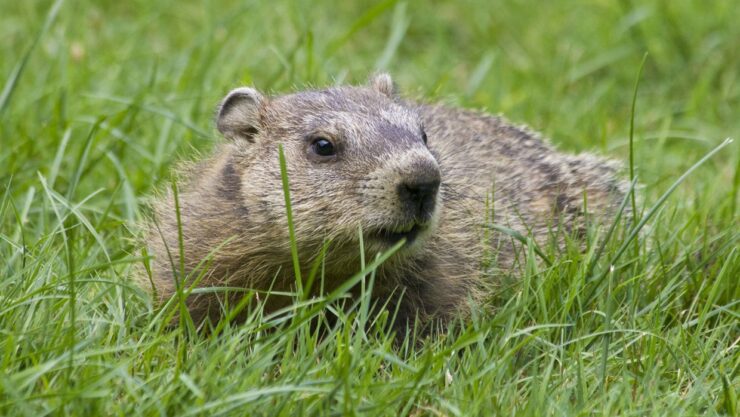 The Woodchuck aka groundhog (Marmota monax) is a rodent belonging to the group of large ground squirrels known as marmots but is sufficiently different in its habitat to warrent a page all to itself. Most marmots, such as yellow-bellied and hoary marmots, live in rocky and mountainous areas, but the woodchuck is a lowland creature. They are widely distributed in North America and common in the eastern and central United States. In the west it is found only in Alaska, Alberta, British Columbia and northern Washington.

In areas with large quantities of alfalfa or other food crops, groundhogs/woodchucks can grow up to 30 lbs. Groundhogs are great diggers with curved thick claws. They have short tials compared to most other ground dwelling squirrels.

Groundhogs are vegetarians and their diet consists of grasses, clover, Plantago, garden vegetables, leaves, twigs, apples, berries, and dandelion. They are not as omnivorous as many other sciurids, but will sometimes eat small animals such as insects and snails.

A nearly-motionless individual, alert to danger, will whistle when alarmed to warn other groundhogs. Groundhogs are excellent burrowers, using burrows for sleeping, rearing young, and hibernating. Groundhogs are the more solitary then other marmots. Woodchuck/Groundhog burrows generally have between two and five entrances, providing groundhogs their primary means of escape from predators. Burrows are particularly large, with up to 45 feet of tunnels buried up to 5 feet underground, and can pose a serious threat to agricultural and residential development by damaging farm machinery and even undermining building foundations.

Groundhogs retreat to their burrows when danger is spotted. However, if the burrow is invaded, the groundhog will tenaciously defend itself with its two large incisors and front claws. Additionally, groundhogs are generally agonistic and territorial among their own species, and may skirmish to establish dominance.

Common predators for groundhogs include wolves, coyotes, large hawks, and owls. Very young groundhogs are often from snakes but that threat is quickly reduced as they grow larger and become to large for the snakes to eat.

Woodchucks/groundhogs breed in their second year, but a small percentage may breed as yearlings. The breeding season extends from early March to middle or late April. A mated pair will remain in the same den throughout the 28-32 day gestation period. As birth of the young approaches in April or May, the male will leave the den. One litter is produced annually, usually containing 2-6 blind, naked and helpless young. Young groundhogs are weaned and ready to seek their own dens at five to six weeks of age.

The groundhog prefers open country and the edges of woodland, and it is rarely far from a burrow entrance. Since the clearing of forests provided it with much more suitable habitat, the groundhog population is probably higher now than ever before. Groundhogs are often hunted for sport, which tends to control their numbers. However, their ability to reproduce quickly has tended to mitigate the depopulating effects of sport hunting.