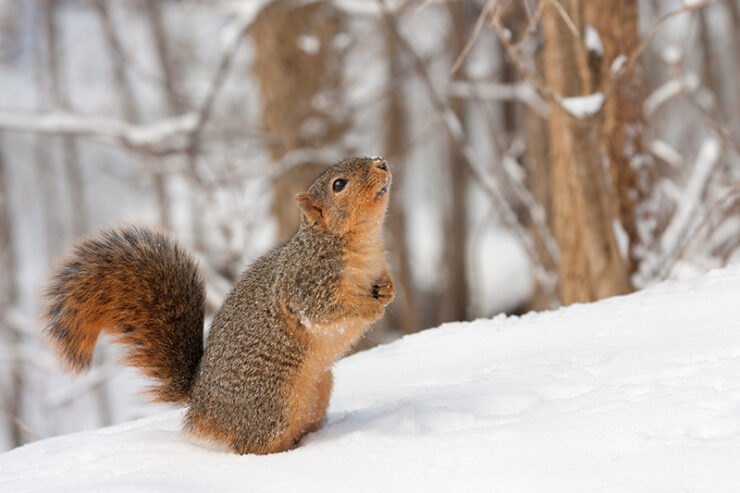 The Fox Squirrel (Sciurus niger) is the largest species of tree squirrels in North America. They range from the East Coast excluding New England, Colorado, and Texas and have been introduced into Northern California. Fox squirrels prefer woods/forest as any tree squirrel would, but they mostly-Chincoteague Brian Gratwicke inhabit forest with an open understory and more scattered less densely spaced trees than do the eastern grey squirrels. They do best in forest composed of oak, hickory, walnut and pine.

Fox squirrel are large tree squirrel nearly doubling the size of the typical grey or red squirrel. The males and female coloration is identical. There are three different color phases that appear mostly apon where the squirrels ancestry comes from. Most areas the animals are orangish, brown-grey to brown-yellow, while in some areas such as the Appalachians or in some areas in Louisiana they are black in color. There is another color pattern found throughout the southeastern United States where the squirrels exibit white bands on the face and tail.

Fox Squirrels depend mainly on tree seeds for food, but they sometimes will eat buds, fruits, cultivated grain, insects, bird eggs and even small lizards. As is the popular perception with squirrels the Fox Squirrel exibit the classic scatter-hoarders activity that is so much associated with squirrels.

Fox Squirrels are most active just after sunrise and just before sunset. Fox Squirrels build two types of homes, depending on the season. In the summer nest of leaves and twigs are frequently used as homes and during the winter they will seek out dens in tree cavities if possible.

There are two breeding seasons, one peaking in December and the other in June. The young are blind, without fur and helpless at birth. They become independent at about three months and reach maturity at one year. Their maximum life expectancy is 12 years for females and 8 years for males. Automobils, hunters, hawks, snakes and bobcats are some of the perils that Fox squirrels must contend with.

Fox Squirrels are very successful and have changed very little since the from the late Oligocene and early Miocene epochs.