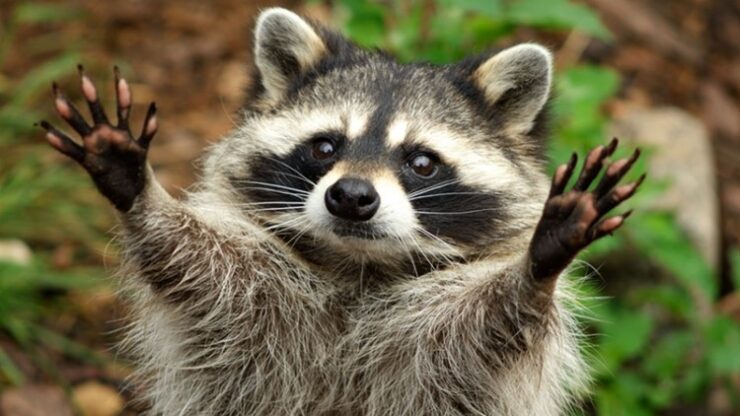 Raccoons (also spelled racoon) are nocturnal mammals. Raccoons are the masked bandits that everyone is familiar with in numerous stories and tales. Raccoon are unusual in that they have thumbs, which aren’t opposable like in humans but still enable them to open many closed containers such as garbage cans and doors or latches.

Raccoons are omnivores with a well deserved reputation for being clever and mischievous. Male raccoons are generally larger than females. A baby raccoon is called a kit.

Raccoons are omnivorous, eating berries, insects, eggs and small animals when they can catch them. Raccoons sometimes appear to wash, or douse, their food in water before eating it. It is unknown why raccoons perform dousing. Interestingly raccoons will go through the motions of cleaning their food even when they are not around water??? And captive raccoons are more likely than wild raccoons to douse food???

Raccoons are often considered pests because they forage in trash receptacles or eat dog food left on back porches. Raccoons also pose a serious risk to any household pet within their vicinity, it is not uncommon at all for a raccoon to seriously injure, kill or eat cats and small dogs. The raccoon has also adapted well to city life, and in cities such as Toronto the raccoon is, after the grey squirrel, the most common urban pest.

Raccoon can carry a number of diseases one of which is rabies. Raccoons can carry rabies but show no symptoms. So although you may think they are cute never touch or approach a raccoon. Blood, feces and other bodily fluids may carry the rabies virus.

Rabies is so prevalent in some populations of wild raccoons that several states and the US federal government, as well at authorities in Canada have developed programs of oral vaccination to try to reduce the spread of this lethal disease.

Raccoons were a source of food for early American pioneers, providing a sizeable amount of protein. Raccoon hunting still occurs all across the Eastern Unitied States. The fat is strongly flavored and has a disagreeable odor, so it is generally removed before cooking. The favored method of cooking is roasting, with recipes suggesting that sweet potatoes are a good complement to the raccoon’s meat, which is dark, as either a stuffing or side dish.

Raccoons are taken occasionally by squirrel hunters but they are primarily hunted at night with the aid of dogs. Once a Raccoon has been succesfully treed by the hounds they hunter then shoots the racoon for either its fur or the meat or both, or many times they are not shot at all and instead simply spotted and then left. The thrill of the chase and the joy from hearing the hounds in the night is reason enough for many coon hunters to venture forth.