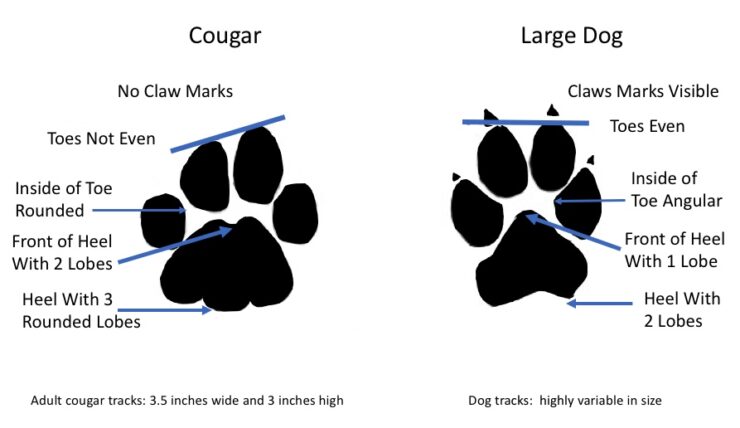 Finding cougar tracks is one way that experts can confirm the presense of a cougar in an area. Although for track evidence to be accepted as a proven confirmation it would have to be examined by a trained perfessional. But before that step can reached the layperson would have to know what he is looking at in order to even know to notify authorities.

Here you will find some drawings of animal tracks that can help guide you. Keep in mind that what appears easy on this page isn’t so easy in the field. The tracks that are left behind by cougars and other animals are seldom so perfectly formed as the ones below. Cougars do not leave tracks as distinct as other animals such as deer. This makes finding a clear set of cougar tracks even more challenging than might otherwise be expected.

To give an example of this you can look at the return of the Cougar to the midwest right now. Cougars there are rare and any cougar sighting is quite important. All these confirmed sighting are being investigated and recorded. You might think that tracks would be much more plentiful than dead cougars right! Yet the opposite is true when it comes to confirming the presense of a cougar.

The most important aspects of identifying whether a track is a cougar or some other animal is two characteristics which are fairly easy to discern. One, does the track show the presense of claws. Cougars keep their claws retracted so cougar tracks rarely will show claw marks. The second aspect is size. Since other cats do not have the size feet that cougars, bobcats and other small animals can quickly be eliminated.

If you do come across cougar tracks or what you believe is cougar tracks in an area that they are no longer suppose to be then take pictures of the track if a camera is available. Cover the tracks to prevent them from being disturbed by rain or by other tracks being laid down on top of them. Then notify the local authorities as soon as possible.