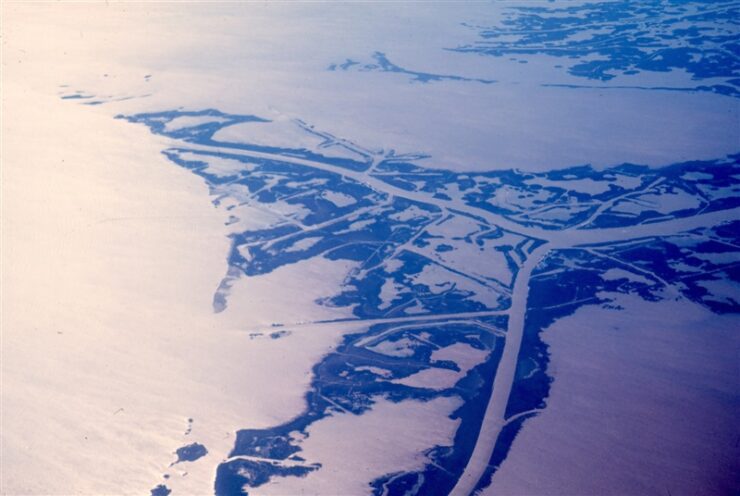 When it comes to fishing, few places can match the versatility of louisiana’s birdfoot delta. Mention the birdfoot Delta in any fishing circle, and you’ll get more than your share of puzzled looks. Yet this is the exact term geologist use to define the prolific area of Southeast Louisiana, better known as the Mississippi Delta complex. It’s safe to say that few anglers realize that this is the best known of the world’s major delta systems-and for more than just fishing reasons:

According to geologist, the Mississippi River has formed sixteen separate delta lobes in the past 6,000 years. Fourteen are included in the Teche, St. Bernard and Lafourche Delta complexes; the remaining two include the present birdfoot Delta, out of Venice, which is an extension of the earlier formed initial lobe of the Plaquemines modern complex. Simply put, the delta complexes are a direct product of the powerful, land-building machine – the Mississippi River.

It can rightly be said that nature took no rest when it came to building this fertile delta region, as even at present it is still building despite man’s efforts to tame it.

Looking at a map, it doesn’t take much imagination to figure out why geologist nicknamed it the birdfoot Delta: three main passes reach out just like that of a giant bird’s foot making its claim. These water routes carry rich sediments and nutrients that make for excellent habitat for an endless array of marine life. Therefore it comes as no surprise that sportfishing enthusiast, commercial fishermen and oil industry tycoons come to reap the productivity of its unusual waters.

On the sportfishing side, this area becomes most productive in the fall when ideal water temperatures and river stages are reached; offering unparalleled action in blue water, brown water, green water and freshwater zones. And if youth is not fleeting, it is possible in one day to fish all four water habitats, taking red snapper, white trout, specks, reds, tarpon, tuna and various freshwater species-not to mention sore arms and a sunburned back.

The phenomena starts with seasonal low river stages that allow saltwater intrusion from the Gulf. The process continues as long as the river remains below normal (late Aug.-late Nov.), prompting the “saltwater wedge” to move northward up the river, often beyond New Orleans.

Consequently, its not uncommon for anglers fishing inside the river and adjacent passes to catch both saltwater and freshwater species from the same spot. It is also during this time that the blue water rip moves within 3 miles of South Pass, making it possible for small-boat owners to get in on pelagic fishing action that would otherwise be out of reach.

Accessibility to this productive environment can be achieved by making your way to the Venice Marina, located on Venice Boat Harbor Road, via Highway 23 south to Tidewater Rd. Here you’ll find Capt. Dave Ballay, owner and expert guide fisherman of the birdfoot Delta for many decades. He’s a man with a well-known reputation of pointed numerous anglers on the right course to successful fishing.

The marina is conveniently located just off Tiger Pass and yields easy access to a variety of waterways and directions, depending on where and what you want to fish for.

For instance, if you are considering blue water action, South Pass will be one of several good choices to consider. Though the other two passes of the birdfoot can take you to blue water zones near the continental shelf, this is the easiest and shortest route. But first you must make it to the Head of Passes-the gateway to the birdfoot.

To make your way to this area via the marina, you will have to get into Tiger Pass, which is located right outside the harbor, and head north till you reach the Mississippi River at the Jump. From here, head southward down the river for about 10 miles until you reach the Head of Passes. This is where the main stem of the Mississippi River branches off into three distinct directions: Southwest Pass (west), Pass A Loutre (east) and South Pass (center). It’s to be noted that at Head of Passes, all ship traffic is routed only down Southwest Pass to the Gulf, as this is the deepest waterway of the birdfoot Delta.

Southwest Pass is the favorite for a number of different species, but redfish no doubt top the list. At this location, most anglers are found redfishing near the Gulf on either the East Bay or West Bay sides of the rock jetty. Here bull reds in the 25- to 40-lb. class are commonly caught on cut mullet or cracked crab, fished on the bottom with a sliding sinker rig.

If specks are your thing, don’t overlook the West Bay wellheads, located within a mile of the mouth of Southwest Pass. Live croakers fished on the bottom near these structures will catch specks bigger than most anglers can imagine.

But if that doesn’t fit your fancy, look southeast along the horizon and you’ll notice the oil production platforms of Block 93, infamous for drawing the big boys-tuna, billfish and wahoo.

If still not impressed, gaze westward about five miles. Here you’ll notice the oil production platforms of Block 79, where red snapper and white trout abound throughout the year. Cut squid or porgies and a bottom leader rig is all that’s needed to stock the freezer with these filets.

Like Southwest Pass, South Pass also has a lighthouse, located at Port Eads, a few miles before you reach the mouth of the pass. This port not only harbors many large fishing yachts, it also has a fuel dock whereby further fueling can be accommodated if needed.

From the mouth of South Pass, the Halfway rigs (Seven Mile rigs) are conspicuously situated. These rigs, located in 400 ft. of water, offer the offshore angler a choice of fishing: bottom fishing for snapper, grouper or amberjack; or trolling for tuna, billfish or wahoo. During this season, big yellowfin and blackfin tuna are often seen surface feeding in this area, making them easier targets to locate. Here is where Rapala CD 18’s or Giant Halco Tremblers can wreak havoc, particularly when trolled near the oil platforms.

Hooking up down current on one of these rigs and setting up a chum line of cut porgies to draw tuna or amberjack to the bait is a popular and effective tactic employed by many anglers. To make it even more productive, some choose to fish at night under the lighted platforms, where the abounding lights act as an additional enticement. The famous Cognac oil production platform, which is located 11.6 miles from South Pass buoy marker, is another area that draws numerous trollers. This huge structure stands off the canyon (continental shelf) in 1080 ft. of water.

Anglers on the Gulf at night often use the Cognac as a reference point, as it is easily identified at great distances; resembling a neon birthday cake with a single burning candle in the middle. “Anytime you can find a well defined rip, you’re gonna find dolphin (dorado). When conditions are right, the wind is calm for a few days and the tide cooperates, the rip will be well defined. But when conditions conflict, the rip will be scattered, making it harder to locate,” Capt. Ballay claims. Light tackle and tandem rigged Sparkle Beetles is all that’s need to catch these colorful, hard-fighting fish two at the time.

To keep them feeding and within casting distance, anglers will leave a hooked dolphin along side the boat to draw others. Besides great blue water fishing, tarpon fishing at the passes near the Birdfootis unparalleled. According to Capt. Ballay, the most ideal time for tarpon fishing is frequently overlooked. He says most people fish them from June to September. They’ll make every rodeo and don’t miss a week, all the way to Labor Day weekend.

After that, all rodeos have ended, and the anglers are burned out. Ironically, it is during this time that the best tarpon fishing begins and runs through October. Capt. Ballay claims the largest concentration of tarpon show up during the end of September through October at Northeast Pass and South Pass Mud Lumps, located via Pass A Loutre. Here they generally stay in water depths of 35-45 ft. and take trolled Coon Pops or Pet 21 spoons. The fishing-adventure menu is boundless; but make no mistake about it, it can only be sampled at Louisiana’s birdfoot Delta!