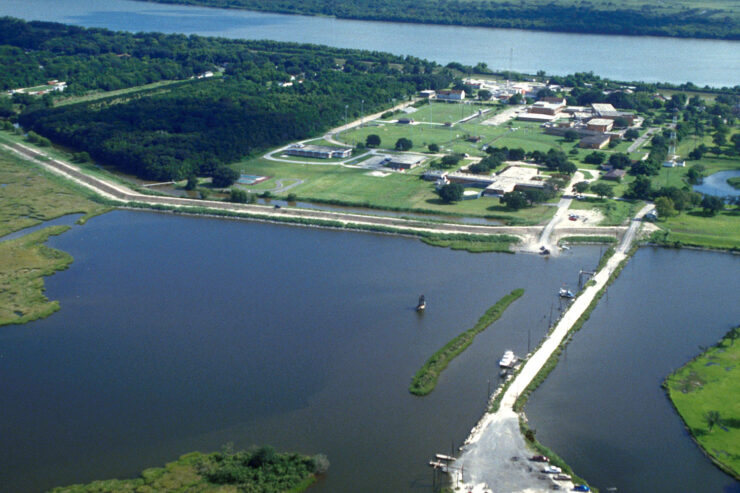 Excitement was building as I contacted Alex Rogers, a professional fishing guide out of Port Sulphur, Louisiana – and one who has been very much acquainted with the inside scoop of the goings-on of the area for some 25 years. “The trout, Jerry, are thick as grass on the ground in the surf,” he said in answer to how the fishing had been in recent months.

His response only confirmed what I had already been hearing about Port Sulphur, home of the shoals of yellow gold. Alex indicated that the landscape has changed and the area doesn’t look the same as it once did due to erosion and the removal of the rock barrier that surrounded the old sulphur mine in Lake Grande Ecaille. This wasn’t all together surprising to hear since erosion has been taking it’s toll all across the Gulf Coast states for various reasons. As a result of this, routes previously used by anglers years ago are now impassable.

After the brief phone conversation, arrangements were made to meet at High-Ridge Marina in Port Sulfur, Louisiana, so that Alex could show me how the region now appears. I was also looking forward to Alex letting me in on some of his hot fishing spots that he claims have been progressively getting better with age. Particularly since he told me that this year he had boated one trout that went 8 lbs. and several others right at 7 1/4 lbs. Admittedly, some other states might not consider that bragging material, but to those familiar with Louisiana and the netting problems over the past years, these are exceptional trout from this territory.

A week following the call, David Tompkins a professional photographer and I found ourselves heading south down the Freeport Sulphur Co. Canal in a 19 ft. La Sabre boat with Alex at the helm. Bright vapor lights from the nearby sulphur company and various other inside marsh oil facilities dazzled the early morning darkness like fireworks on a New Year’s night. This bustling sulphur company lies a couple of miles farther south of the marina on La. Hwy. 23 and both sit off the west side of the highway. Paralleling the highway to the east is the Mississippi River.

One thing you can be assured of, if you happen to pass up the marina, you’ll know you’ve done so by the strong stench of sulphur that suddenly permeates the air. Here is where huge ships tower above the nearby Mississippi River levee, adjacent to the sulphur company, wait to be loaded with “yellow gold.”

As we continued down the canal, Alex pointed out that the old rusty pipe rack that once paralleled the waterway on the east side had been removed, along with the ever familiar abandoned rusty ship that stood lodged near Little Pass.

As the sun began to peep over the horizon, his boat was well under way, having already made it through Billet Bay to Robinson Canal and onto Shell Cut, a waterway that opens up into the Gulf of Mexico. Here is where familiarity struck me, as he pulled up to the flat-top piling stands that lay just outside the cut. Here is where tank batteries once stood atop the piling platforms, but hurricanes have since taken their toll on the structures.

Within a matter of feet from these pilings and just outside the cut, lay the immovable “Sunken Shrimp Boat,” a landmark and abrupt reminder of how treacherous the sea can become. Additional piling configurations lay about a block farther west of this spot. Probably no other surf area within a ten-mile radius harbors more structure in one location.

This area is somewhat similar to the inside marsh south of the Freeport Sulphur Co. Canal, where remnant structures from the abandoned mine can still be seen throughout. Of course, no area of Louisiana is complete without oil company installations, and Port sulphur is no exception.

“The plastic cocahoes are taking the (sparkle) beetles over, really,” Alex said, casting his single cocahoe lure toward the piling legs and steadily retrieving with his bait casting reel. “The beetles are good for school trout and anywhere you look for birds working over trout about that size,” he indicated with his hands spread apart 14 inches or so. Alex generally prefers going after speckled trout over 15 inches or more, and anything he thinks has to be measured he throws back.

It wasn’t long before he connected with one, pulling it from the shallow, green water around the piling legs and systematically removing the hook and pitching it into the ice chest. In the days before the limits, Alex remembers coming out here catching school trout two at a time on tandem sparkle beetle rigs until he his arms wore out. Since size and limit restrictions, however, trout have more of a chance of growing bigger.

Just outside of Shell Cut along the shallow sandbar, bull redfish like to lurk. Alex says both this spot and Four Bayou Pass about 4 mile farther west are good places to fish for them both by day or night.

While Alex prefers using artificial cocahoes, he doesn’t leave the dock without the live version along with a good supply of 1/4 oz. jig heads to present the offering. It’s sort of an insurance, when the artificials don’t work he throws the live ones, and vice versa. This strategy, coupled with seeking out good established structure and moving water was most effective yielding both redfish and speckled trout, even in water made murky by intermittent thunderstorms.

After bagging a dozen or so speckled trout, Alex lifted anchor and headed east a half a mile or so down the beach where he came upon a pile of rusty scrap iron which he pointed out to be the remains of a sunken barge. It lay right up against the shore along with some broken and scattered concrete slab pieces. “Yesterday, I caught two twelve pound redfish right here,” Alex asserted, shutting down the noisy outboard motor and allowing the boat to drift toward the conglomeration sitting in the calm surf. Minutes later both he and I put two nice bronze-backs (redfish) in the ice chest that would soon see more speckled trout from the same spot.

Compared to many other places along Louisiana’s coast, Port Sulphur doesn’t get a whole lot of publicity, possibly because of the marina’s inelegant appearance and competition from two other neighboring launches within the ten mile radius. However, the marina in Port Sulphur (Hi-Ridge Marina) is the centrally located of the three and is best situated for accessing Lake Grande Ecaille, Lake Washington, Billet Bay, Bay Long, and Lake Robinson, to name a few.

Alex fishes year-round out of Port Sulphur, following a routine pattern of fishing the surf during the warmer months and moving to the inside marsh during winter. Summertime surf fishing, according to Alex, can get as hot as the weather. But in winter, inside fishing can be just as good.

“It was simply fantastic fishing this past winter, Alex added. The southeastern section or Lake Grande Ecaille, where the desolate sulphur mine once stood, is now covered with a bed of rocks three feet or more below the surface, making for an excellent inside fishing area. Popping corks here are a must and freeline fishing is only for the more experienced.

Port Sulphur’s shoals of yellow gold are an unusual site for most anglers. Here’s a place where you’ll find anglers fishing small, islandlike reefs of sulphur projecting above the water’s surface. Most local anglers are undaunted by the menacing odor while fishing around these bait-attracting mounds.

At the mine, one can’t help but notice how structure abounds in limitless design. Like the area where 25 to 30 ft. pilings project above the water’s surface, spaced only a few feet apart, and numbering 30 to 40 in one section. In other nearby spots are vacant concrete platforms, some of which enter the water, and various barges loaded with mangled rusty pipes add further to the distorted fishing haunt.

Port Sulphur with its grassy shorelines, cuts, lakes, bays, and bayous is home also not just to various finfish, but the ever sought after shrimp. Two shrimp seasons during the year will be the cause of many anglers hanging up their poles and breaking out the trawling nets.

The brown shrimp season usually opens May 15 and closes mid July. The white shrimp season usually opens August 16 and closes the last week in December. Dates may fluctuate according to data received by the LDWF on shrimp growth; so check with the marina or LDWF. Boats waiting to be launched on opening day for brown shrimp will wait in a line that reaches all the way back to the highway. And they’ll tell you it’s worth it.