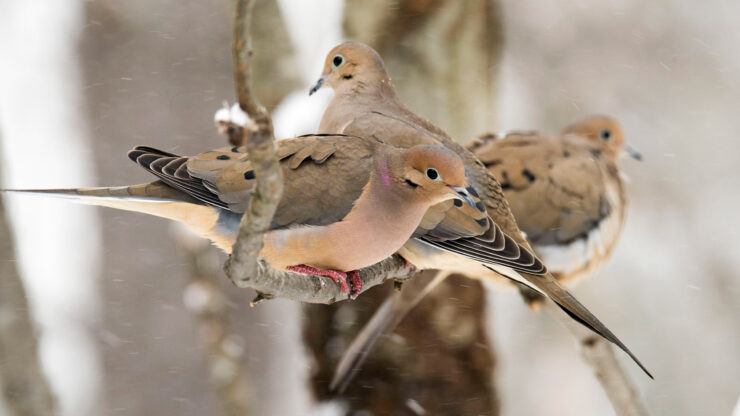 There are many types of Doves but for our purposes we will be talking about Mourning Doves (Zenaida macroura). The Mourning Dove ranges from Central America to southern Canada. The mourning dove might migrate depending on its location. The further north you go the more likely it is that the bird will fly south for the winter.

Mourning Doves are very fast and their erratic flight makes them very hard targets for hunters. Without a doubt they are missed far more time than they are hit by hunters.

Mourning Doves are monogamous but doves that have lost their mate will find a new mate. They lay two eggs per brood but can have multiple broods each year. Incubation takes approximately two weeks. Courtship begins with a noisy flight by the male, followed by a graceful, circular glide with outstretched wings and head down. After landing, the male will approach the female with a puffed out breast, bobbing head, and loud calls. Both parents care for the young.

The female dove builds the nest. The male will fly about, gather material, and bring it to her. The male will stand on the female’s back and give it to the female, who then builds it into the nest. The nest is constructed of twigs, conifer needles, or grass blades, and is of very flimsy construction. These birds will sometimes requisition the unused nests of other Mourning Doves, other birds, or arboreal mammals like squirrels.

Both sexes incubate, the male from morning to afternoon, and the female at night and the rest of the day. Mourning Doves are devoted parents; nests are very rarely left unattended by their parents.

There are five subspecies of Mourning Dove:

The range of all subspecies can be seen in the map. The blue is winter only range and the light green is summer only range. Darker green indicates morning doves can be found there year round.

The five subspecies of the Mourning Dove look similar and are not easily distinguishable.

Mourning Doves eat almost exclusively seeds. Mourning Doves generally eat enough to fill their crops and then fly away to digest while resting. They often swallow grit such as fine gravel or sand to assist with digestion. The species usually forages on the ground, including at bird feeders. At bird feeders, Mourning Doves are attracted to one of the largest ranges of seed types of any North American bird, with a preference for corn, millet, safflower, and sunflower seeds. Mourning Doves do not dig or scratch for seeds, instead eating what is readily visible.

Mourning Doves can be afflicted with several different parasites and diseases, including tapeworms, nematodes, mites, and lice. The mouth-dwelling parasite Trichomonas gallinae is particularly severe. While a Mourning Dove will sometimes host it without symptoms, it will often cause yellowish growth in the mouth and esophagus that will eventually starve the host to death. Avian pox is a common, insect-vectored disease.

The primary predators of this species are birds of prey such as falcons and hawks. When nesting, corvids, grackles, housecats, or rat snakes will prey on eggs.