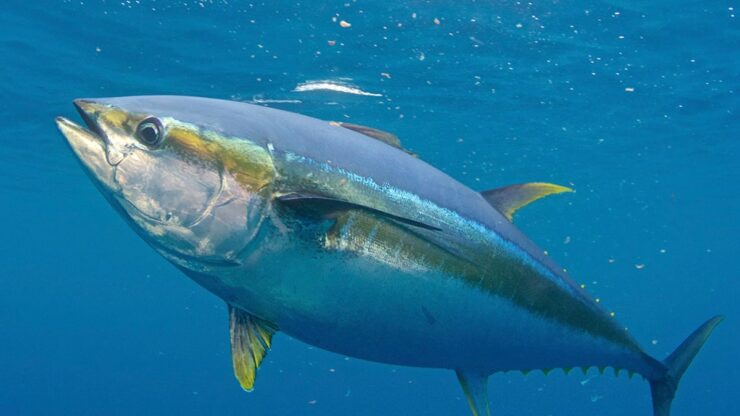 Yellowfin Tuna (Thunnus albacares) reach a maximum size of 450 pounds. Yellowfin have football shaped bodies, dark blue or black above with yellow on the sides and fins tinged in yellow with the finlets yellow. Yellowfin occur in both the Atlantic and Pacific Oceans.

Yellowfin Tuna are schooling fish and are the most important commercially of all the tunas. Tuna are pelagics that live in the open oceans of this world. Remarkably the relatively recent addition of deep sea oilrigs has given these open water fish something to relate to even when in 3000′ of water. Schools of tuna will sometime set up residence on the structure for weeks at a time. Tuna are most commonly caught in water at least 500′ deep off the Louisiana coast. Yellowfin Tuna are a highly prized gamefish.

There are a few primary ways that these fish are caught. One is by chumming the fish too the boat and then hoping to get one to eat a piece of chum drifted back with a hook in it. Another is to troll baits both natural and artifical behind a boat. Dropping diamond jigs down deep and jigging them up and down with long sweeps of the rod can often produce when the fish are deep and only surface briefly before retreating to the cooler deeper waters. Probably the most exciting way to catch tuna is casting surface popper baits and probably the most effecient method is to slow troll live hardtails behind the boat.