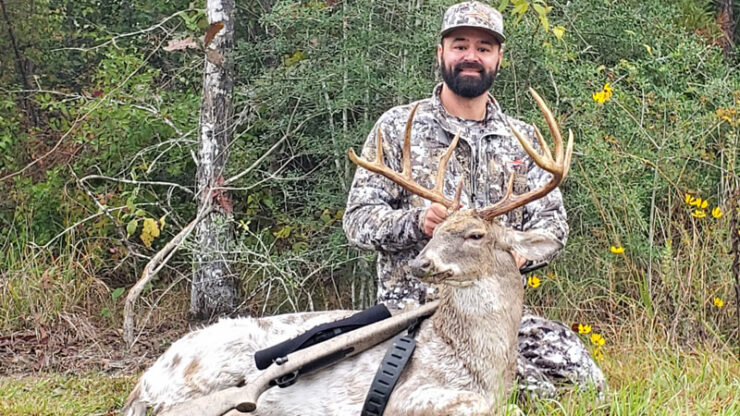 The year was 1995 (three years after Hurricane Andrew). The place… Louisiana’s Attakapas Island WMA. Attackapas Island is thick and formidable, resisting entry and cold as heck in the Winter.

While returning from a morning hunt I found HUGE deer tracks left on a remote trail. I studied these tracks and made my mind up that this had to be the monster of a lifetime. I hunted this area with a passion for the remainder of the season and passed all small bucks thinking the monster would appear at any moment. All in desperation as I never saw him the remainder of the year but did continue to see his extremely large tracks.

The next year (1996) I was pleasantly surprised to find these tracks again prior to the season. I hunted this place extensively seeing many animals but no monsters. On some days groups of deer would pass as they were extremely social and just hung around the area. I noticed that several of these groups would come by the portable stand but quite frequently one old long horn spike would always appear by himself usually using a completely different route than the large groups.

I tried everything! I tried different routes to my stand, cover scents, deer lure, different time of the day hunts even all day hunts etc! But all to no avail. The big buck just seemed to be killable. On the second to last day of the season after taking a lot of ribbing because I had not kill that year, I decided to take the first buck I saw regardless of the monster tracks that keep appearing. I had almost concluded I was hunting a ghost.

The old longhorn spike came walking through the area and I shot him. After getting down from my stand I went over and observed the weird spikes; they looked like knife blades and almost touched in the middle. Upon further inspection of the buck I noticed the front two feet were completely deformed!

Yea you got it – Club Feet!!! The hooves were about twice the size of those on a normal deer.

After taking a lot more ribbing from the group I hunt, they also came to the conclusion that this was the deer I had been hunting almost extensively for two years. The deer horns still hang in my den for a conversational purposes.

Can’t wait for this season to start although I have no known monster to hunt. – Happy Hunting to all!