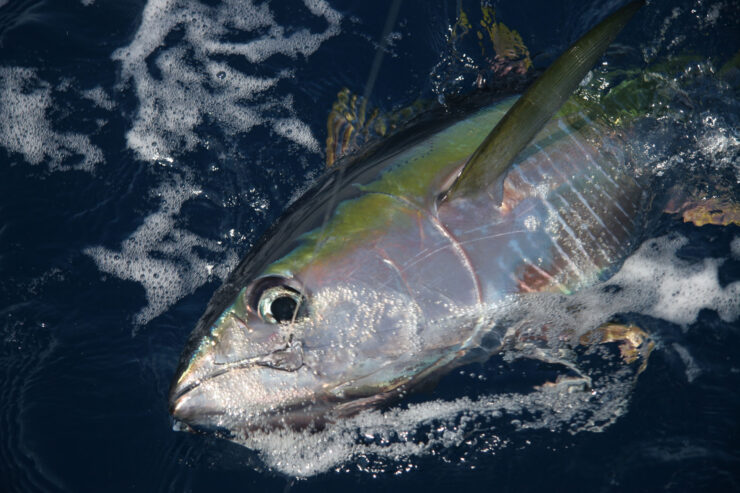 Two hours of “chunking” for tuna proved fruitless that evening on the Midnight Lump, as the sun relentlessly glared down on us. What added to the aggravation were the long sunburned faces that wondered if fresh tuna would ever line their outdoor grills.

However, the alternative plan was not yet unleashed: night fishing the nearby West Delta 143 rig with 4 oz. Diamond Jigs. This particular rig, located 3 miles north of the Midnight Lump, stands out obviously at night with its bait-attracting, boom-rigged flare ablaze. Any southeastern Louisiana tuna fishing enthusiast worth his salt can admit that the combination of flares and shiny jigs can be very effective at night, especially when combined with “chunking,” better known as chumming.

When it comes to the latter, veteran tuna anglers agree that it is important to draw the tuna, not feed them. This is underscored by the fact that some charter captains use a grinding device that finely minces the porgies and sets up an oily, fish-attracting slick.

Within less than 5 minutes of chumming and casting Diamond Jigs into the flare-lit surface of the calm night Gulf, pandemonium broke loose when these football-shaped battlers hammered our lures, causing us to leapfrog over one another to keep lines from tangling. Bent poles and spooling lines sprayed salt water into the air and onto our faces like lawn sprinklers on a hot summer’s day. At this point we were being roughhoused, since we chose to tackle these critters on spinning tackle.

To be in tune with tuna takes a measure of technique. Second generation charter Captain Brandon Ballay of Venice Marina, Venice, La., attests to the fact that there are certain techniques if one wants to succeed. “I cut each porgy into 6 pieces so that they come out in little squares,” Brandon said, “and I bring at least 50 pounds of porgies each trip just for chumming.” After he gets all the porgies chopped up, he begins slowly tossing pieces overboard. “I like to wait about 35-45 seconds (relative to current flow),” Brandon added, “until the batch disappears out of sight.” He said the key is to repeat the routine as soon as each batch disappears from sight. “If you fail to keep the chum flowing, the fish will scatter.” he affirmed.

Now besides luring the tuna with a good chum line, enticing them to strike the Diamond Jigs was a no-brainer. Without a doubt, this is one lure that fits the motto: “Don’t judge the book by its cover!” The irony of the Diamond Jig is that it definitely won’t win any beauty contests-unless, of course, the judges happen to be tuna fish. Nevertheless, this long, plain-looking, four-sided, shiny piece of lead, armed with a single treble hook, drives tuna into an absolute feeding frenzy.

With all ingredients in tune, it wasn’t long before one tuna after another lined the bottom of the boat’s deck like cordwood on a log cabin’s floor. Thankfully, tuna-when hooked-run away from structure. When I say “run,” I mean they can peel off 150 yards of line straight out and dive 100 feet straight down in a matter of a few seconds, with no sign of an intermission.

Even though these tuna were mostly blackfin, no one aboard was complaining-other than an occasional groan resulting from sore arms and backs.

Like any other fishing, specialized equipment is required if you want to be in tune with tuna. Though deep-sea rods and reels can be used for jigging Diamond Jigs-and this is needed when yellowfin over 50-lbs. infiltrate-it isn’t practical for casting. For casting purposes, a 7-8 ft. surf casting rod (one piece) works well, armed with a spinning reel rated for at least 40 lb. test and spooled with 30 lb. Berkley Big Game mono. It is also advisable to wear a gimbal belt to keep the rod butt from drilling into your abdomen.

By all means consider only a reel with the highest line capacity, a reputable clutch system and multiple ball bearings. It is also essential to tie the Diamond Jig directly to the line, in as much as tuna can be very timid in striking if leaders, snaps or swivels are employed.

Be prepared in case a “big boy” strikes. Yellowfin, of course, get much larger than the blackfin, and are capable of spooling an entire spinning reel (blackfin are generally under 30 pounds, but yellowfin can exceed 200 pounds). For this reason it is a good idea to hookup to the rig in a way that allows you to quickly disconnect in case you have to chase one down. A floater on the end of the rig hook rope works well in the event that it has to be untied from the boat and thrown overboard for retrieving later.

Blackfin tuna become easy pickin’s if you utilize the oil production platform lighting at night along with chumming.