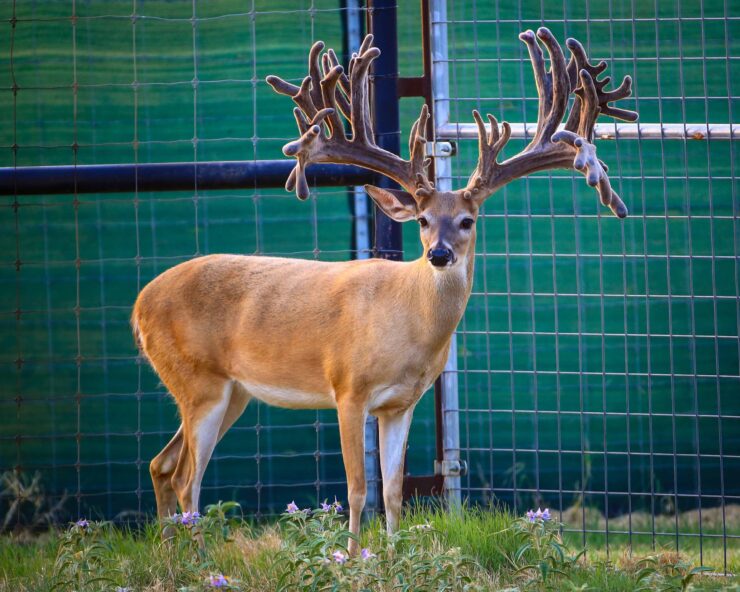 When you are a child you might dream of fairytale creatures. As we get older these dreams turn to other endeavors. For many deer hunters, the dream is of record buck bucks or that rare non-typical buck with the coveted droptine. For one Louisiana hunter the 2001-02 hunting season presented a rare opportunity for a combination Non-typical / fairytale dream come true.

The dream was played out in Northwest Avoyelles Parish! And Jamie Bordelon was the lead man in the tale. Jamie’s hunting season had started off slow. He had located a promising spot on the week of Thanksgiving but swarms of mosquitoes had kept him away.

Finally in mid-December Jamie would have two weeks of vacation in which to do some deer hunting. Jamie planned to hunt the mosquito spot first thing in the morning. The mosquito population was now down to bearable levels, but the hunt wasn’t to be. Heavy rains the week before thrawted his plans. At 10:00 am he decided to give the spot a try despite the water. This would prove to be a wise decision although it didn’t appear that way at first.

As he suspected the water was deep. Almost going into his hip boots. Jamie Bordelon’s hot spot looked more suited to fishing than deer hunting. All of the sign that he found on Thanksgiving week had was now under three feet of water.

Jamie said, “I was very discourage but decided to do some grunting anyway, a technique that had worked for me in the past.” After doing some grunting I waited. Ten minutes had passed when I saw a nice six point walking straight to me, looking for the buck that had been doing the grunting. I knew that I would have to make a good shot because the water would immediately erase all sign if the buck ran off and needed to be trailed. “Fortunately my shot was true and I dropped him in his tracks.”

After taking the buck I left the place alone and didn’t hunt there again for nearly a week. The next time I would hunt it was with my oldest son Derek who was 17 years old. I placed him in a stand close to the spot where I harvested the six point, while I hunted a little deeper in the woods. At about 8:30 I heard a noise and that’s when I first saw this unicorn or tri-horn buck! He was in hot pursuit of a young doe about 70 pounds, they ran right past me and stopped. Well the next thing that happened surprised us both. I shot and missed him clean! I sat there stunned, in disbelief that I missed him! He continued on in hot pursuit of the young doe. At this point I didn’t realize the uniqueness of this buck. I called Derek on our 2-way radios, and said, “Your not going to believe this, but I just missed a buck in my face.”

About 3 min. passed and I heard a noise coming from the same place that the unicorn buck came from, it was a 10 inch spike trying to catch up with the doe and buck that I had just missed. I turned in my stand and dropped the spike. As we were pulling the spike out we found an area just at the end of my shooting lane full of scrapes and rubs. I told Derek, “Lets move your stand and put it on these scrapes.”

Two days later Derek and I could hardly wait for daylight to come. That morning as we sat in our stands I would call Derek using our 2-way radio’s every hour to find out if he had seen anything. Our pre-dawn excitement had really waned as 9:00 came and went without either of us seeing anything.

At 9:15 I looked down my shooting lane and saw a big-bodied deer. He had his head down and was running from side to side, like a dog on the trail of a rabbit. It was headed toward Derek at first but it abruptly turned and started backtracking, still with his head to the ground. I called Derek and told him to keep and eye out because I had just seen a good buck in hot pursuit close to him. I was sure the buck would return, but 30 minutes later I was really starting to get concerned.

I started grunting with the hopes of bringing him in close again. I was grunting loud and frequently. Then it happened. I heard a stick break and saw a young doe. The buck was trailing her but staying just far enough away so that I couldn’t see him. I felt that the doe had come to my grunting with the hopes of starting a fight, possibly so she could escape. She came right by me and the buck was following 20 feet behind her. I turned in my stand and yelled at him. This stopped him in his tracks.

My first shot hit him too far back, and he ran under my climbing stand. My second shot proved fatal as he fell over in a treetop. I was shaking pretty badly, so I called Derek and told him to come here, I had another one!

I was still in my hand climber as Derek walked up to the deer. I could see him studying the deer. I called out, “Is he dead?” Derek answered, “Yes.” But Derek was still going around the deer studying him. I asked, “Whats the matter.” He replied, “He’s a nice one, but he has an extra horn growing out of his head!” I replied, “What?” “You need to come down and see for yourself”, he said.

As I approached the deer, I couldn’t believe my eyes! This buck had an extra antler growing right in the center of his head! You could tell by the scaring on his face and neck that he had been fighting with other bucks. I told Derek, “Boy I bet with this extra horn, he was really kicking some butt.” We stood there amazed at what lay at our feet. We just stood there and stared before loading him onto my 4-wheeler and bringing him home to show family and friends. It was Christmas Eve and pretty cold, so I decided not to skin him just yet. As my family and friends came to see him the word had spread around the community! It wasn’t until after all the attention people gave the buck that I truly realized how unique this unicorn buck really was.

At this point I really thought that the middle horn was somehow connected to the other two horns. I brought the cape to my good buddy at Hawn’s Taxidermy and asked for his opinion. He said that this was the first time that he had ever seen anything like it; but he too, was almost sure that it was also somehow connected to the other two horns. That afternoon he called and said, “Jamie you have to come see this!” When I arrived he showed me that the third horn was truly a third horn and not at all connected in anyway to the left or right antler. It actually looked as if this third horn would shed every year just like the buck’s regular antlers.

With the antlers still at Hawn’s Taxidermy, he told me that lots of people have gone to his place and asked to see the Unicorn! He and I decided to mount the deer and display it where everyone can enjoy seeing this beautiful and unique creature. Hawn’s has his exhibits in Wal-Mart in Marksville, La. and the “Unicorn” will probably be displayed there starting sometime in May. Lots of people have asked me if I would consider selling the horns, too that I just answer if the price is right, you never can tell!