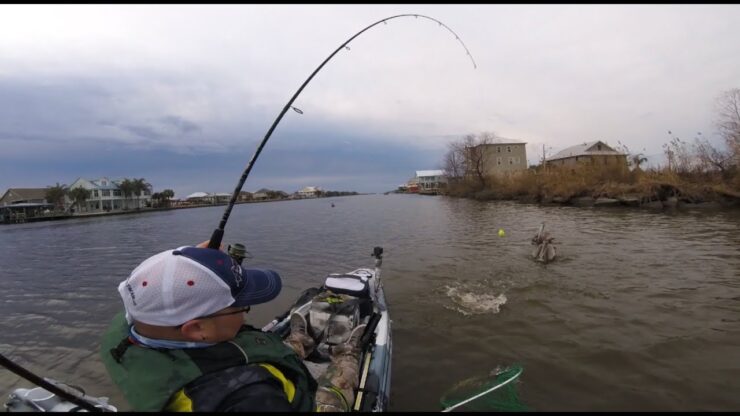 Picture in your mind a roadside waterway, lined with canebrakes and marsh grass, where you can catch the two most sought after saltwater fish species without right from shore. Just drive up to it and literally cast from the back of your vehicle.

Then you haven’t heard about Myrtle Grove Marina, a place that a growing number are discovering to be just such a reality. Here winter bank fishing for speckled trout and redfish has never been better.

Located on the west side of La. Hwy. 23 and 25 miles south of New Orleans, is an area that bombards you with reminders of your geographical location: Delta Bank & Trust Co., Delta Tire & Automotive, Delta Refrigeration Service, to name a few.

Yes, “Delta” is the operative word. But to certain anglers this word invokes thoughts of having to trailer a boat to some far-off launch that without a can of pork-n-beans and road map would be impossible to find. Equally disturbing may be the search for fish in unfamiliar territory.

Not so with Myrtle Grove. Such nightmarish expeditions have come true, however, for some who have chose to launch elsewhere along the Delta, only to return here to find productive fishing right from the shore and within throwing distance of the boat launch.

It’s no secret that may anglers feel that the further away from the launch, the better the fishing will be. But this particular spot has dismissed such foolish reasoning.

How many anglers do you know that sometimes drive over a hundred miles round trip by boat, only to come within a mile from the launch and limit out. The reason may be that spots closest to the launch are more often overlooked, making them more productive due to less fishing pressure.

Ironically, “less fishing pressure” isn’t exactly applicable to the waterway leading into the Myrtle Grove Marina, situated on the dead-end of the Wilkinson Canal in Plaquemines Parish. For one reason, Louisiana anglers know that when cold northers blow in, dead-end canals are the places to be. Here is where bait and pursuing fish setup housekeeping, and the Wilkinson Canal, naturally, is without exception.

Fishing, however, was probably the furthest thing from their minds when the canal was originally dug during the 1920’s for the purpose of floating cypress logs to the lumber mill that sat at its northern end and very near to where La. Hwy. 23 is today. The lumber mill eventually saw its demise somewhere between the ’30’s – ’40’s.

According to Terry Clovan, a former marina operator in 1994, the northern end was filled with dirt some years ago, thus relocating the dead-end section further from the highway by a block or so. Prior to this, only a private group who had a key to the gated entrance could use the canal and reap its fishing productivity. According to Terry, in 1988 Citrus Lands Inc. leased the property and turned it into a marina with all the necessary amenities for sport fishing. The marina fast became known for its easy access to the famous Grand Isle and Barataria Bay via this 12-mile-long canal. For many anglers, the 25 mile boat run to Grand Isle from the marina was a very favorable option compared to the much longer drive by land.

Additionally, the marina’s close proximity to New Orleans also brought many boat-less anglers as word spread about the extraordinary bank-side fishing that begins with the first cold snap in October. During the colder months, anglers of all ages show up to line each side of the canal like pine trees along a Mississippi road. The best part about it, everyone was catching fish- no matter how unskilled.

Terry admits that he never imagined bank fishing could be so good until he was hired at the marina. He said people don’t hesitate to pay the nominal fee for a good day’s fishing. Some come by the pickup truck loads with picnic baskets and families totting anything from cane poles to the most expensive rod and reels money can buy. At times, bait buckets filled with live minnows, tackle boxes and various folding chairs have peppered the banksides with just as much intensity as hungry hogs feeding at a trough. “The weather is the key factor right here. When it gets cold, they (fish and bait) start busting up in here,” Terry said, while he glanced and gestured toward the water right outside the hoist area that was boiling with various bait fish and flashing porgies fleeing on the surface. Now and then a loud, flat plopping sound could be heard from redfish sucking bait fish from the subsurface.

Fishing around the hoist and back-down ramps are off limits, but customers could venture down either side of the canal as far as the road could take them, either by vehicle or foot. “In October you catch `em out in the grassy part, which is the shallow water on the other side of the bulkhead- all out through there on either side. Once it’s cold, though, they’re up in here at the dead-end. Northwest winds, northeast winds, and straight north winds are good winds. They need to blow for about two days. After that, the fish either got to Grand Isle or come in here. Grand Isle is a little haul for `em, so a lot of `em come here,” Terry explained. These winds cause the duck ponds and marsh to drain off into the main canals, bring with them bait and predator fish. Speckled trout are caught mostly out toward the middle of the canal, while and along the edge of the grass, canebrakes, and bulkheads redfish are caught.

“I fished about 50 times this year and limited out 40 to 42 times on speckled trout,” Terry said. In between launching, fueling boats, fetching minnows, and getting ice for customers, Terry manages to wet his line quite successfully from the bank side of the Wilkinson Canal. He prefers using the half clear/half chartreuse sparkle beetle, though he claims good catches on purple or smoke colored sparkle beetles at times. But none of these lures would be effective if the retrieve isn’t slow enough. The cold weather slows down the fishes’ metabolism, making them strike only slow moving baits.

Though many anglers like using live cocahoe minnows, Terry sticks with artificials baits and he don’t mind showing them off. Looking into the truck of his car, Terry discreetly pulled out his tackle box from among a forest of various whatnots. His tackle box boasted an arsenal of various lures in just as many colors as there were types. He picked out a gold 1/4 oz. Crocodile spoon, held it to may face, and explained while shaking it: “I caught 25 trout in thirty two casts one day on it!” He then placed it back into its tackle tray with one hand, two Mirr-O-lures emerged in the other. “These two are the best floaters, only when the water’s calm; but I’ve caught `em on the tiny Torpedoes,” he added. His favorite Mirr-O-lures colors are chartreuse with black and red, and black with red and gold. Rat-L-Traps, he said, make no difference in color- although blue with silver seem to dominate his box.

The Wilkinson Canal is home to a large variety of fish that include croaker, sheepshead, drum, speckled & white trout, striped bass, flounder, and redfish. But Terry claims he’s seen small tarpon and even a 3-ft.-long lemon fish pulled from this canal. He explained how one day an angler disgruntled at catching a hardhead catfish tossed it out across the water in order to free the nuisance from his line, when surprisingly a large cobia inhaled it. Also, freshwater species irregularly intrude on the area, but usually during the summertime doldrums.

“The killer spot is from that side of the bait tank to the second light pole,” Terry pointed out, alluding to where the majority of anglers like to congrgate along the bulkhead on the east side of the canal, adjacent to the back-down ramp. As Terry spoke, loud cheering sporadically erupted as someone latched into a thrashing redfish. You could see patrons along the bulkhead meticulously balancing themselves to get a glimpse of the erupting action.

Most interesting to see was how some anglers would launch their boat only to move down toward the middle of the canal, just outside of the casting range of those fishing from the shore. Only the oblivious ventured beyond the productive and busy dead-end section of the canal.

Myrtle Grove Marina offers fishing fun for the entire family without having to spend a whole lot of money fueling the boat and going through all the other hassles associated with the cleanup afterward. Those with pickup trucks or vans, for example, really had things under control, as they could back right up to the water’s edge and have everything needed within easy reach, including their favorite radio station in earshot range. Some of the female anglers, prone to being easily chilled by the nippy northern breeze, simply jumped into the vehicle, cranked up the engine, and turned on the heater until they warmed up enough for a rebound.

Howard Austin, a New Orleans resident and owner of a 21 ft. open-fishing boat, pointed out why he liked coming to Myrtle Grove: “You can catch fish and it doesn’t take a whole lot of time in preparation as is the case when I take my boat out. You just grab your bait bucket and aerator, pick up some fresh shrimp and live minnows at one of the bait stands, take your rod, reel, tackle box, and ice chest, and you’re on your way.”

It’s not unusual, Howard said, to limit out on redfish and to come back with a mess of speckled trout in two or three hours of morning fishing. The only complaint he had was that so many people line up casting popping corks that the water becomes an obstacle course of time-wasting entanglements. It can really get frustrating, he lamented.

Howard likes fishing live cocahoe minnows on ultra-light tackle with six lb. test and a 1/0 Lazer hook tied directly to the line. Once the minnow is transfixed to the hook, he looks for a clear shot among the barrage of annoying popping corks. After casting, he allows the minnow to swim to the bottom and then slowly and steadily retrieves it in. It doesn’t take long before the drag breaks loose and the fight is on. In a matter of minutes he pulled out a gleaming golden redfish and laid it on the bankside to unhook it. Nearby cork-fishing anglers scramble to remove their corks in imitation of his success. However, Howard claims their endeavors are futile since the secret lies in using ultra-light tackle.