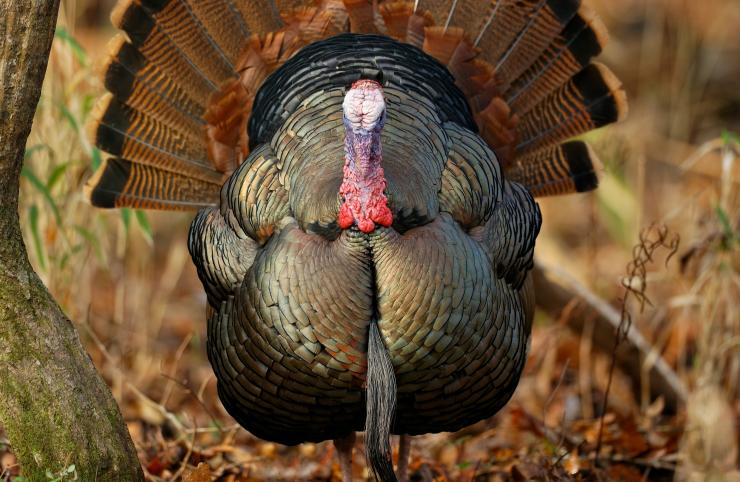 I was shopping for turkey calls in the Bass Pro Shop in Nashville Tennessee when a nice friendly man, Fred Dotson who runs RutNBucks from Citronelle, Alabama walked up to me and asked me if I like to turkey hunt. I was riding my little scooter as I am a handicap hunter, we talked for a few minutes about turkey hunting and also about our Christian faith. He told me about his new website, Hope Outdoors and that they were sponsoring a handicap hunt in Missouri and he asked me to be his guest. Wow, there is no doubt in my mind that God arranged this meeting with Mr. Dotson so we could become friends and so I could help in his ministry to help other people.

It was opening day of turkey season and everyone was excited about our chances as we had scouted the previous afternoon and heard several gobblers in the area. My hunt began at 4:00 am as Mr. Fred picked me up at camp and off we went to a farm about 10 miles from the Iowa state line.

We arrived early as he set up my feather flex decoys a good 45 minutes before daylight. As I sat in the fence row where we had built a makeshift blind I was so excited anticipating the first owl hoot. Nothing will make a long beard gobble any quicker than a hoot early in the morning. At 5:50 the music to my ears began as turkeys were gobbling from every direction. I know there were ten or more different birds that were gobbling but it could have been twenty just as easy.

After a good twenty minutes of gobbling, I noticed six hens walking over the hillside toward me. A strutting long beard was next to come over the hillside but he had no interest in my decoys as he had his mind on other things. At 6:20 another long beard came over the hill strutting straight toward my decoys. As the gobbler got to within 45 yards I decided to wait for a sure kill shot since I could see four other birds strutting at the end of the field.

There were so many things happening as I could see in every direction at least 150 yards. As the second gobbler angled off toward the hens I was glad that I had waited because I was treated to a turkey show the next few minutes. The old gobbler at the end of the field decided it was time for the three other strutting gobblers to hit the road as he ran them off one at a time. Three jakes then checked out my decoys as they walked right up within twenty yards. As I watched the old gobbler at the end of the field breed a hen I heard a gobble directly behind me.

It was a different gobbler up on the ridge that had three hens with him and he was in full strut and gobbling. I had already seen eight different gobblers and not fired a shot in the first hour of hunting.

As I sat in amazement at what was happening I couldn’t help but thank the Lord for allowing me the opportunity to experience the most exciting turkey hunt that I’ve ever been on. As I had shifted my position to watch the gobbler behind me I caught something out of the corner of my eye coming over the hill in front of me. It was the heaviest long beard that I’ve ever seen and he was on a dead run coming to my decoys. He was only sixty yards away when I first saw him but he was coming fast. As he stood face to face with my Jake decoy looking like he was going to give him a good whooping, I was able to get my gun up as he was in full strut. A soft puck from my mouth call made the old gobbler turn in my direction for a nice head shot that closed the deal.

I had just filled my Missouri tag at 7:20 am with the heaviest bird that I’ve ever killed, a 25 pound one with a 10 inch beard and 1 1/8 inch spurs. In my ten years of turkey hunting in Tennessee I have never experienced anything like this hunt. I saw more action in my 90 minutes of Missouri turkey hunting than I’ve seen in three weeks of Tennessee turkey hunting prior to me coming out and I’ve been very blessed to have killed three Tennessee turkeys already this year.

I have hunted for 40 years and my priorities have changed over the years, now its not all about what you harvest but the friends you make on your hunts and the time you spend in the field with God’s wonderful creations. Mr. Fred and all the people at RutNBucks that help were all unbelievable people. Everyone at our camp made me feel right at home and we all had two things in common, our love for being in the great outdoors and our love for God. Thank you, Mr. Fred and to all the RutNBucks helpers for the most exciting turkey hunt that I’ve ever been on but more importantly thank you for the friendship and fellowship we had in my three days that I shared with you.