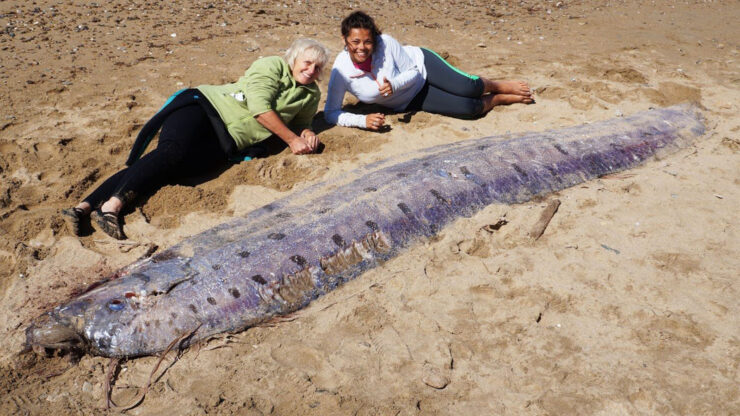 Here is a picture of Giant Oarfish caught at the US Navy SEAL training center on Coronado Island, just off the coast of San Diego, California. The photo was taken in 1996! Giant Oarfish are one of the strangest looking fish that you will ever see. It is believed that Giant Oarfish which get up to 50 feet long.

Oarfish are very, very long, pelagic fish. Meaning the live for out in the ocean. Oarfish are found in all temperate to tropical oceans. The oarfish is the longest fish in the world reaching lengths of up to 56 ft.

Most sighting of Oarfish are either dead ones that was up on the shore or either sick oarfish that are swimming uncharacteristically near the surface. Although the Oarfish might be the largest member of its family it isn’t the only one that draws attention when it shows up. Another close relative is the Deal Fish.

Oarfish feed almost exclusively on zooplankton which are very small creatures. They feed simply by straining the water. They will also eat very small fish, jellyfish and occasionally squid. To feed the oarfish doesn’t need to chase its food down. Instead it just hangs vertically drifting with the currents filtering water as it goes. They do use there swimming ability to try to maintain their position in areas were the feeding is most productive.

Only one oarfish has ever been photographed at their normal living depth. This occured in the Gulf of Mexico. All the rest of the oarfish picture you see are of oarfish that are either dead or sick and dying. For some reason when sick they surface, apparently unable to regulate their swim bladder.

The oarfishes strange serpent like look is believed to be the source of a number of sea serpent myths. Seeing a 40 foot snake like silver fish floundering near the surface would certainly confuse and bewilder anyone unfamiliar with these strange beast. Oarfish also have a red crown, actually long dorsal fin and pelvic fins give the fish a sort of mane.

Check out this great Oarfish Video: