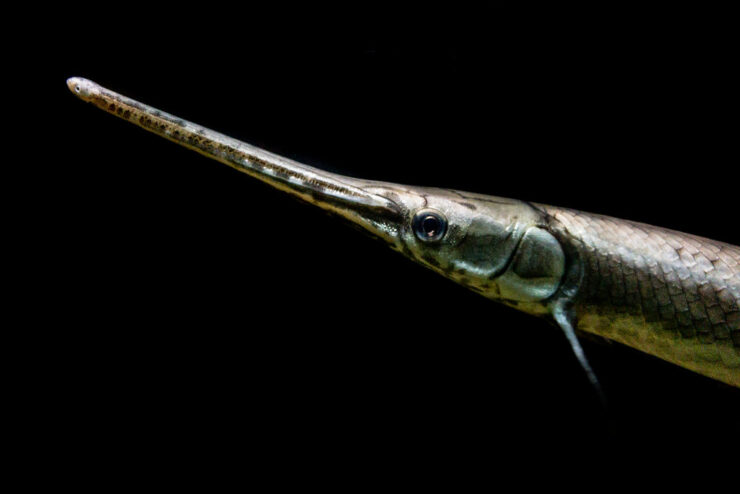 Do you look forward to an enjoyable Saturday morning of fishing occasionally? Are you feeling more anxious lately due to so few game fish that seem to be available? Are you one of the many weekend fishermen who are finding it to be a little less satisfactory when it gets to be a chore to catch a few bass, crappie, or trout?

There is a real dandy substitute for a genuine sporty tussle with a most readily available adversary of many game fish – an active and fierce predator lurking in wait for game fish, and anxious to strike at your lure!

The Long-nose Gar, a.k.a. pike, billy-gar, billfish, or needle-nosed gar is a slender ray-finned garfish with its body entirely encased in an armor of tough, thick, overlapping, diamond shaped, enamel-like scales forming an impenetrable covering. It is olive to dark green above, white or silvery below, and has large dark spots on the caudal and tail fin. The swim bladder of the gar is connected to its esophagus, which serves as an auxiliary breathing organ. Fish surface periodically to exchange air in their swim bladder. This allows gars to survive when dissolved oxygen is low or not present.

The garfish are relics of a large group of prehistoric fish and are often referred to as living fossils. These fierce predators are among the most vicious fish, and will attack nearly any fish in their path.

The outstanding feature of the Longnose Gar is its slender elongated snout’s beak-like structure closely lined with many small, medium and large razor sharp pointed teeth in both the upper and lower jaws. These fish are extremely skilled and will ambush any fish, including bass, crappie, and any other game fish that gets within their reach. Their feeding manner is to thrash their snouts among their prey, wounding them, and then neatly pick them off with their needle sharp teeth.

The long-nose gar is a long, slender, graceful fish that bask in the sun near the surface of the water, where they await their prey, in sluggish rivers, backwaters, swamps, impoundments and waters with slight currents. They are somewhat sluggish creatures when not foraging for smaller fish, and during warm seasons they can be seen in somewhat shallow water on sunny days, in a slight breeze, rolling in a little wave ripple while gulping air. This is also a fine time to latch on to one of these hard fighting garfish.

Attracting a Longnose Gar with a hooked bait/lure will not usually result in a catch unless the fish swallows the hook. The nature of the fish is to give a sidewise head jerk to injure its intended prey. Therefore, the use of a lure that will easily and quickly become entangled in the fish’s many pointed needle-like teeth is the most successful trick that can be used to catch these prehistoric garfish.

When the nylon threads become entangled in the gar’s teeth, you have “‘hooked”‘ a fighter! The ensuing line-stripping runs, jumps, the thrashing and the tug of war with the fisherman will more than equal any great bass catch experience! The battle will not be over; however, as the act of boating this angry sharp toothed garfish requires heavy gloves, care and caution to grasp the fish by the snout, boat it and secure it from thrashing about the boat. The thrill of the catch is well worth the caution while boating this fighter!

Yes, you can eat Longnose Gar, although the recipes are not well known about this quite tasty white fish. It was one of the principal fish foods during the l880’s, and in some areas of Louisiana and the Gulf Coast it is eaten today. Extreme caution must be assigned to garfish roe. The reason being it is very poisonous to warm blooded vertebrates.

Whether these fish are subject to cyclic variations is not well known, but the proposition that their populations have been increasing dramatically is well supported by fishery biologists, fish and game personnel and many concerned fishermen, especially in Alabama. The construction of dams, river flow diversions, and impoundment areas has greatly enhanced the long-nose gar’s habitat. As long as their reproductive activities are successful, they may well keep increasing for eons. Their rough structure and fierce personality make them free from most other natural predators.

While some fishermen considered Long-nose Gar to be a nuisance, and to be detrimental to many game fish, there are those who give the Long-nose Gar a most serious bid as a “‘game”‘ fish within the references to its sport fishing attributes. Many true bass fishermen have found that the bass and other game fish have become harder to find due to the ever-increasing pressure on them. With no legal limit on long-nose gar, there is an unlimited amount of high quality fishing available!

When searching for an alternative fish to regain the sport of a lightning strike, line stripping runs, jumping, thrashing, and lots of fighting action – one can’t beat being “‘hooked”‘ onto a 25-30 pound Long-Nose Gar mini-monster, with NO HOOKS.