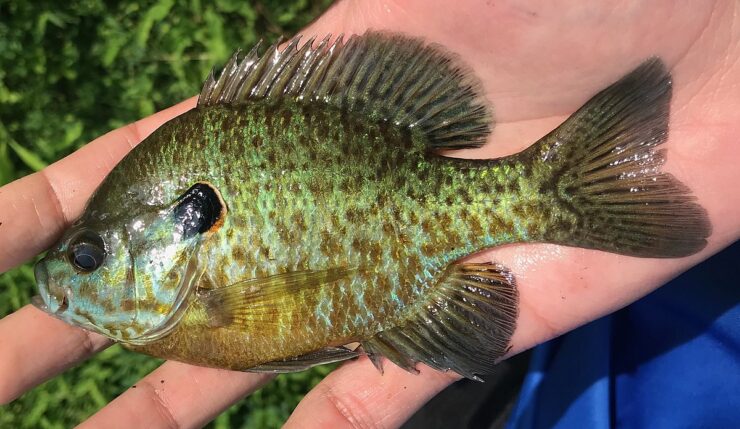 Most probably a cross between a bluegill and a green sunfish although it could be a warmouth, longear, redbreast or other combination as well. They are all capable of cross breeding. Hybrid bream are commonly raised by hatcheries for stocking in private ponds. The hybrid shows characteristics of both species. The body is not quite as deep as the bluegill but is deeper bodied than the green sunfish. The mouth is larger than the bluegill but smaller than the green sunfish. The color markings vary from fish to fish and may appear speckled or mottled.

Hybrid sunfish has disadvantages and advantages depending on what you want. If your pond is primarily for bass then stick with regular bluegills. If bream (sunfish) are the main attraction and larger bass are present then the hybrid is a good choice but they will have to be stocked every two or three years. The aren’t sterile but the vast majority of the hybrids are male, so spawning potential is low. And that is the advantage and the disadvantage.

Low reproductive potential means less fish which in a pond enviroment translates into bigger fish due to lower competition for food. But restocking in a pond is not free and therein lies the disadvantage.