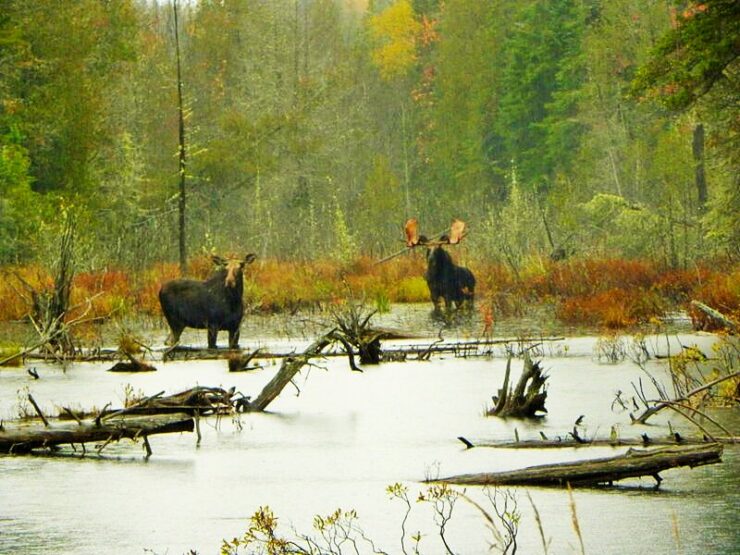 There is no doubt that a wild boar is a seriously dangerous game animal. The mix of phenomenal strength, two razor sharp tusks, and an extremely bad attitude create a real hazard that can turn a hunting trip into a hospital visit in a split second! To avoid blood and bandages a hog hunter needs to have a clear understanding of specific situations that pose serious threats to personal safety.

When most envision wild hog attacks, they picture a gigantic boar in full charge with his pearly white tusks glistening in plain view. This can sometimes be a realistic scenario, but by far the most dangerous hog in the woods is a sow with young pigs. Once a sow hears the distress squeal of a piglet, she becomes enraged and will stop at nothing to protect her babies.

A friend drove his four wheeler down to a creek bottom filled with bamboo one evening to search for hog sign. As he stepped off the ATV, he noticed a few small pigs playing at the edge of the cane. Without thinking, he approached the pigs on foot to take a closer look. All of a sudden a crashing sound erupted from inside the bamboo that was obviously heading his way. The sudden realization of what he had gotten in the middle of made him run for the four wheeler. As he shifted into gear, the sow exploded from the brush and made a B-line for him and his ATV! The sow chased him for over 30 yards before returning to check on the welfare of her young pigs.

When hunters on foot spook a group of hogs, the first reaction of the pigs is to flee the area. In cases where newborn piglets are present, they sometimes will not follow the group, but instead elect to duck down in a clump of grass or behind a fallen log to hide. This situation is best handled by leaving the area in the direction opposite of the grown hogs. DO NOT TRY AND CATCH ONE OF THE PIGLETS!

If a small pig is grabbed or injured, it will immediately let out a blood curdling distress call that will bring the mother sow charging in full battle mode. Not only that but other sows will also instinctively rocket towards the endangered pig to deliver aid. I’ve experimented with both wild hogs in captivity and in the wild and have found that the majority of the time large boars will be alerted by the pig squeals, but will not rush to the scene.

Hunters should also keep this in mind when trapping hogs. Use extreme caution when approaching a hog trap containing small pigs but no sow. It is not uncommon for the sow to be waiting in near-by brush to keep an eye on her babies. Always look for escape routes such as easy to climb trees that allow you to quickly get off the ground.

Large boars, although uncommon, can attack humans for various reasons. Hunters following a wounded boar into brush is probably the number one reason this happens. Any wounded animal is extremely dangerous and unpredictable and should be treated as such. Do not assume a boar is incapacitated just because you do not see movement. The best thing to do is give the animal plenty of time before any tracking is attempted. Then exercise great caution.

You must always remember that wild boars have above average intelligence. The hog is the fourth most intelligent animal in the world, only being surpassed by humans, apes, and dolphins. This makes quite a statement when you look at the intelligence levels of some lesser animals such as dogs. Hogs can easily identify danger and in certain situations have been known to turn the hunter into the hunted.

I was working at the house one afternoon when a friend of mine stopped by and asked if I wanted to ride along while he checked a hog trap on a nearby ranch. I jumped in his truck (without my rifle) and we drove to a creek that was about 50 yards from the trap. We crossed the creek on foot. As we approached the trap, we witnessed two large boars entering the right-of-way in front of us, fighting. As the two boars battled, a few more boars stepped into view. We could see other shapes of hogs in the brush but could not determine their size. My buddy had a rifle and said he wanted to take the larger of the two that were fighting.

When the rifle sounded and the target boar dropped, three other boars darted across the right-of-way, one of them being an extremely large tusker. We listened as the sounds of the escaping boars crashing through the undergrowth grew fainter and further away. The boar that was shot had not moved an inch, so we cautiously approached him on foot.

When we got within a few feet of his location, the much larger boar, (who we assumed was long gone,) came charging our way from a small but thick clump of weeds. This quickly put us on top of the hog trap. Once in a safe position, we watched as the boar ran off. This boar, despite the gunshot, patiently waited for us to get near his ambush position. We had been talking loudly, and the boar knew exactly where we were the entire time. For whatever reason, the giant boar seemed to pick revenge over retreat. If it wasn’t for the nearby hog trap, he very well might have gotten it!

In this case, the bachelor group was probably dueling over breeding rights. When boars are locked up in battle, all subtlelty is thrown out the window. Boar fights are extremely loud and easy to track and get close to when hunting. The boars don’t seem to know you are there, and sometimes you can stalk to within feet of the fight. This yields a great shot opportunity, but also can put the hunter right in the middle of a four bladed knife fight. Always use cover for protection and do not put yourself in a position where you have to deal with two irate boars at the same time.

Following is a list of do’s and don’ts that will help keep you in one piece while wild boar hunting:

1. Always hunt with a partner or means of communication (ex. walkie-talkie or cell phone if there is service)
2. Never approach a wounded animal.
3. Never try to catch or get close to a piglet regardless of if you can see larger hogs or not.
4. Always give yourself a means of escape when still-hunting such as trees or high rocks.
5. Always expect the unexpected. Remember that hogs are very intelligent animals and are not afraid to stand their ground and take an offensive position.

Hunting dangerous game is just that…DANGEROUS! Use proper caution and a good dose of common sense and good judgment every time you are chasing the beast of kings. All it takes is a split second to ruin an entire hunt or even your life. Stay focused and be safe. If you want to make it to the next hunt, you have to survive the one you are on.