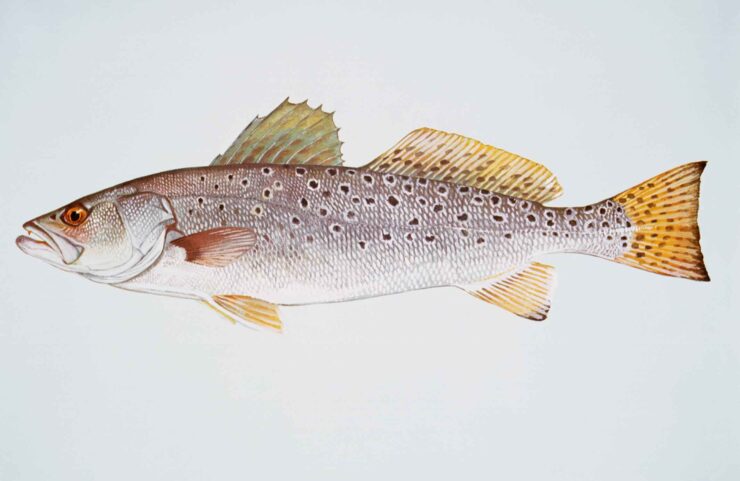 Speckled Trout (Cynoscion nebulosus) also know as speck is a very important gamefish in the Gulf of Mexico as well as the Atlantic Ocean. Speckled Trout are easy to identify. They have elogated bodies with spots. The spots are more prominent when young and are more numerous on the back. Specks have two very easy to recognize identification features. They have two large canine teeth and the inside of their mouths are yellow. Specks grow to a maximum size of about 16lbs although the average is about 1 pound.

Specks are a coastal saltwater species of the Louisiana coast where they range from brackish water out to the close in rigs. The young speckled trout start their lives out in the marshes and small lakes of coastal louisiana. As they grow in size and becomes less vulnerable to larger predators they move there residence further out. Also speckled trout are a schooling species so once you find one there are usually more!

Speckled trout can be caught year round. They are unusual in the respect that there are two distinct groups of anglers that fish for them. Winter fisherman and spring summer fisherman. Some people wait until the cold weather of the fall before venturing out in search of specks and reds in the coastal marshes. Others can’t wait until Spring and Summer so they can hit the beaches, shallow rigs, and larger bays in search of their quarry. These two groups are actually targeting two different groups of fish with obviously some overlap. The speckled trout fisherman that hit the surf and shallow rigs or fishing the adult population and therefore catch speckled trout of a much larger size on average than the marsh speck chasers.