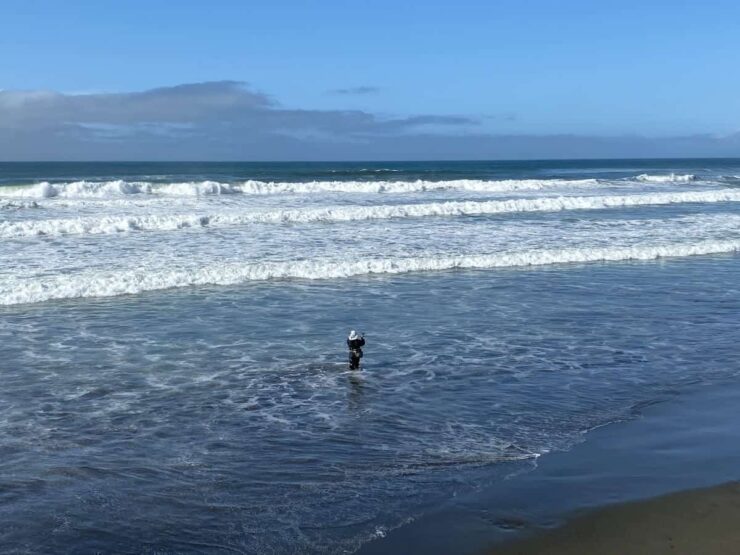 The ability to Read the Beach is a skill that takes a lifetime to perfect. It is however a necessary skill to acquire as it effectively informs us where to place our bait and increases our chances of catching a fish. The ability to read the beach allows us to identify sloughs, highways, gutters and currents just by viewing the wave action.

The landscape under the water is more or less similar to the beach associated with it. Notice the landscape while standing on the shoreline with your back facing the sea. In most cases the landscape of the seabed will be similar.

Looking out to sea you will notice that the swell is more or less constant. As you scan closer to shore you will find that the swell becomes higher and waves begin to form. Do not follow the waves to shore just yet. Zoom in to this area and you will notice that waves are constantly being formed in that particular spot. Okay, now start focusing to the right and left and you will find that the first wave is being formed at a similar distance all along the beach. This allows us to draw a mental picture of the sand bar pushing up the swell that forms the first wave.

Now follow the first wave to the next swell and you will find the next sand bar running along the beach. You may find three or more sand bars. The seabed in between the sand bars are the lower points of the shoreline and are called the Highways. The location of the sand bars remain the same only for a day or two. They are changing constantly depending on the forces exerted on them by tidal and wave action. The only constant is that as long as there are waves there are sand bars.

Thus far we have learned that water moves towards the shore forming waves as it passes over sand bars. We notice that this water travels towards the seashore but we cannot see the water return to the ocean. No waves are formed facing the opposite direction. This is because water arrives on the surface and returns to the ocean along the sea bed causing a current commonly called the backwash or rip currents. The strong force of the backwash literary rips through weak points in the sand bars forming drains or gutters.

At this stage, just by looking out to sea, we are able to isolate the number of sand bars and their shapes allowing us to pinpoint the highways inbetween. We also know that the rip currents break the sand bars at their weakest points. Identifying the gutters are also very important. All we have to do is to take a closer look at the swell as it forms the first wave rolling over breaking into the highway. Scanning along this line you will find areas where the waves are not breaking but remain a mre swell. These are the gutters and drains. Since the sand bars are washed away at these points, there is nothing to push the swell up to cause the wave.

The highways between the sand bars offer predatory fish a safe passage while on the lookout for food. Like any predator, its survival factor lies in the efficiency of the hunt. These predators or as we fishermen call them Game Fish lie in wait at the intersections were the backwash cuts the sand bars. The rip currents wash little fish and other food practically into the jaws of the gamefish which lay in ambush at these points.