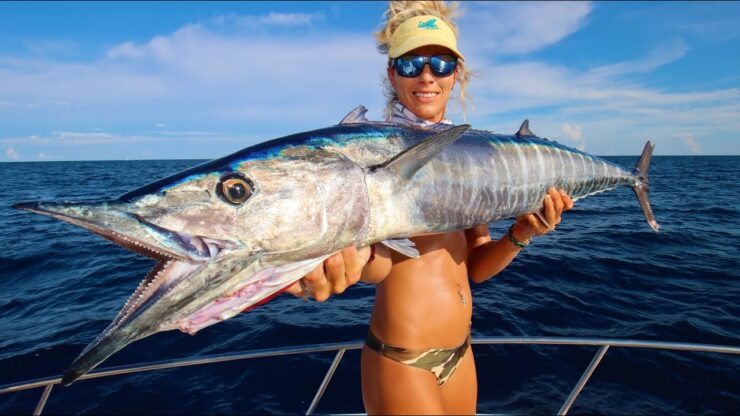 They’re the meanest, fastest and biggest mackerel in American waters, said to reach speeds up to 60 mph. Anglers fishing the blue water zones of the Gulf of Mexico are often pleasantly surprised by incidentally hooking them while trolling for other species like tuna or marlin.

Wahoo can also be found from Virginia to South America, the Caribbean and the Mediterranean and can be found in a large number of other areas around the world. They seem to be mysteriously elite, especially to those who have only heard or read about them through an informative channel.

What is this fish – reputed to be the fastest gilled creature of the sea? It is the wahoo! (Acanthocybium Solanderi) Also called queenfish by the natives of the Caribbean, Ono by those of Hawaii, Peto by those of the Bahamas and Springer by the Brazilians. However, no matter what name you call it, the wahoo is most impressive in both appearance and fighting challenge it provides.

To Gulf anglers, nevertheless, the name “‘wahoo”‘ perhaps lends more to the audible reaction of the recipient upon a jolting hookup with one of these lean, sleek, torpedo-like speedsters, than to a definitive scientific parallel. Here is a fish time and again confused with its cousin the king mackerel- due to its similar shape. But besides other identifiable traits, they’re easily distinguishable from the kings if the color hasn’t faded; a normal occurrence soon after death that renders the numerous dark vertical bands that extend to below the lateral line totally invisible. These bands are not found on the king mackerel, consequently you can see where the confusion may start if it is not freshly identified.

Besides the aforementioned, there are other discerning characteristics, such as its long snout which is about half the length of its entire head section, and the fact that king mackerel infrequently venture into the same territory where wahoo roam. This is because wahoo are more often found in deeper, blue water zones where dolphin and billfish occur.

Another difference between the king mackerel and wahoo lies in the tail section (caudal fins). On wahoo the tail fin projections are straight up and down; the kings have an arched shape projection.

Nevertheless, one of the greatest differences, if the others possibly fail you, is when it comes down to taste. Wahoo have snow white meat lacking heavy blood lines as do others in its clan. Here’s a meat that is firm in texture and uniquely mild tasting, even after extended freezing. In short, it is a connoisseur’s delight.

There is much pro and con as to whether wahoo are more abundant in one place than another. There again, it probably depends on what source you listen to. If you are one to hold the National Marine Fisheries Service studies in high esteem, it’s interesting to note what their study turned up. For example, a study of catches per hour of the top ten fish by offshore ocean trolling (excluding all near shore waters) showed that wahoo were not among the top five fish anywhere, and not among the top ten in either northwest Florida (Panama City Gulf Coast) or south Texas. Does this mean that the Gulf of Mexico is not a good place to hunt wahoo according to the N.M.F.S.? No way!

Wahoo are subject to being caught throughout the seasons in blue water, but in the Gulf area they begin breeding in May, reaching a peak in June and continue until October. They grow rapidly from birth, where some say they start out two-thirds fish and one-third alligator. Then, by the first year, they attain the length of about three feet. Between the ages of two and three, they are 4 to 4 1/2 ft. long, and four year olds are usually in the five foot range.

Interestingly, nowhere to date are wahoo sought commercially and normally they are not even a by-catch of longliners; neither are they vulnerable to traps, drift gill nets or trawls since it is even difficult to hook one on rod-and-reel due to their hard mouth and caninelike sharp teeth. Hence, they are often lost as often as landed. What this boils down to is that wahoo are not under much fishing pressure and no regulations to date have been imposed- creel or size limits.

Any angler familiar with catching wahoo can attest to the fact that they indeed grow larger than king mackerel and are more dominating in strength and beauty, vaunting brilliant vertical bands on their sides, and brandishing mighty teeth capable of slicing through 100 lb. test monofilament like a knife slicing unrefrigerated butter.

Obviously, going after these fish requires hefty equipment comparable to that used for catching tuna and marlin. Though one might get away with catching the aforesaid fish with the use of mono leaders ahead of the bait or lures, that’s not the case with wahoo. You’ll need an 80 lb. test steel leader in 4 ft. length, either single strand or multi-strand, in order for the mono line to survive the vicious initial blow of its powerful jaws.

Some long type lures (hard plastic, wood, etc.) such as the Rapala Magnum 26 (one ft. long) may be able to get by with a bit shorter leader since its solid length offers additional protection from the wahoo swallowing the complete lure. Using leaders longer than 4 ft. in length really isn’t necessary and doing so can impede the lures action. Of course it’s a different situation if you are drift fishing live bait. In such a case longer leaders of up to 6 ft. in length would be necessary.

Off the Louisiana coast, wahoo are repeatedly caught within the depth range of 15 to 20 ft. below the surface, particularly during spawning months as mentioned earlier. This is quite contrary to some other places that almost always use baits off planers or downriggers to get down deep where they normally like to stay.

This is not to say downriggers are never used off the coast of Louisiana to catch wahoo. When water conditions are murky or during the off season when better strikes occur down deeper, downriggers are more productive. Understandably, if strikes are not occurring at or near the surface, try your baits on downriggers starting at depths in 30 ft. increments until a hookup is made.

While Louisiana wahoo are mostly caught by trolling, there are other techniques that also catch them, like free-lining live mullet or large pogies while drifting near blue water rip lines or over a major structure. This is generally a slower and less convenient method that requires the use of a round live bait tank as well as a good source for obtaining such baits- usually captured with a cast net since they are not available alive commercially. As with any other sport fish, knowing what they the fish prefers to eat can aid in selecting the right kind and color lures for a more effective presentation.

Wahoo like feeding in the upper layers of the Gulf where they can find such species as small mackerel, flying fish, butterfish, herrings, spiny boxfish and squid, along with anything else that strays to far away from its sargassum grass cover.

Despite popular belief that big baits catch bigger fish, this is not the case with big wahoo which will tear up even small sized lures. I’ve seen 4/0 triple x treble hooks completely removed from the tail section- split ring and all- of a Rapala CD18 lure, leaving it splintered and mangled as if it were hit with a sledge hammer.

Wahoo, after taking the bait, run fast, straight and hard, but don’t rocket down deep as do yellowfin tuna that are more relentless. Without a doubt, their stamina far exceeds that of the king mackerel under battle. Their fight can be likened more to a fight with a billfish but without its leaping.

The IGFA world record is just under 150 lbs. but they do get much larger, with one reported going 183 lbs. The Louisiana state record is 139 lbs. 4 ozs. caught by Myron J. Fischer in April, 1976. As far as maximum size, biologists admit they do not know fully how big wahoo may reach, since many pelagic fish continue to grow all their lives. Unlike other species of fishes, wahoo don’t get relatively stockier with age, but continue to become bigger and stronger as well as more athletically muscular and contoured.

Unlike other fish that school, the wahoo is basically a loner, only converging on a feeding area in a group briefly to take care of its seemingly endless appetite. For this reason catching two or more fish in one area isn’t rare, once the feeding zone is discovered.

In Louisiana, the oil production platforms are the most popular locations for anglers, including the sea buoys that are sometimes located near these structures. Strikes can occur as close as 30-40 ft. from these steel-legged reefs, generally on the down current side. A considerable number, however, are also caught along the open waters of the 100 fathom curve where the continental shelf serves as a current deflector for moving bait.

The six-foot long, eighty-pounder shown here battered a Rapala Magnum 26 lure in blue water out of South West Pass, Venice, La., in seas in excess of six foot. The picture could not be taken until one hour later due to the extreme rocking of the vessel, but by that time the distinctive vertical side bands had vanished. The result is a picture to the unfamiliar eye that could pass for a huge king mackerel.