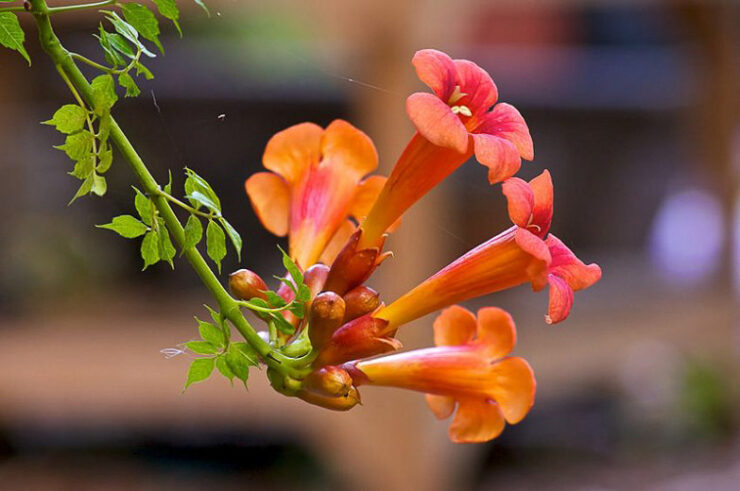 Trumpet creeper (Campsis radicans) is a large and vigorous woody vine of the family Bignoniaceae, notable for its showy trumpet-shaped flowers. It is native to woodlands of the southeastern United States, but is a popular garden perennial plant across much of the country as some cultivars are hardy to as low as -30F/-34C.

The leaves are ovate, pinnate, 3-10 cm long, and emerald green when new, maturing into a dark green. The flowers come in terminal cymes of 4-12?, orange to red in color with a yellowish throat, and generally appear after several months of warm weather. The plant as a whole may grow to 10 meters in height.

The flowers are very attractive to hummingbirds, and many types of birds like to nest in the dense foliage. The flowers are followed by large seed pods. As these mature, they dry and split. Hundreds of thin, brown, paper-like seeds are released. These are easily grown when stratified.

The vigor of the trumpet vine should not be underestimated. In warm weather, it puts out huge numbers of tendrils that grab onto every available surface, and eventually expand into heavy woody stems several centimeters in diameter. It grows well on arbors, fences, telephone poles, and trees, although it may dismember them in the process. Ruthless pruning is recommended. Outside of its native range this species has the potential to be highly invasive, even as far north as New England.