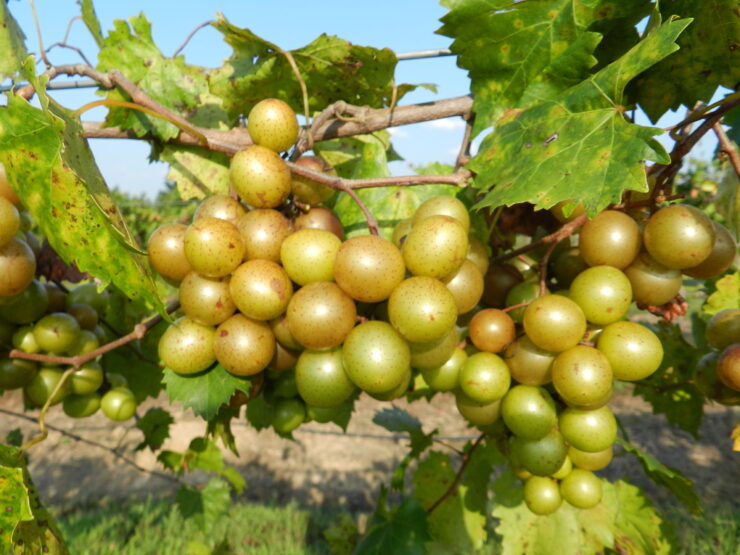 Muscadines (Vitis rotundifolia) are a grapevine species native to the present-day southeastern United States that has been extensively cultivated since the 16th Century. Its recognized range in the United States extends from Delaware south to Florida, and west to Missouri, Kansas, Arkansas, Oklahoma and Texas. They are well adapted to their native warm and humid climate; they need fewer chilling hours than better known varieties and they thrive on summer heat.

The muscadine berries range from bronze to dark purple to black in color when ripe. They have skin sufficiently tough that eating the raw fruit often involves biting a small hole in the skin to suck out the pulp inside. Muscadines are not only eaten fresh, but also are used in making wine, juice, and jelly.

Although sharing the genus Vitis with the other grapevine species, muscadines belong to a separate subgenus, Muscadinia (the other grapevine species belong to Euvitis), and some have suggested giving it standing as a genus of its own. Some taxonomists have also suggested splitting two additional species off from Vitis rotundifolia: Vitis munsoniana and Vitis popenoei. All have 40 chromosomes, rather than 38, are generally not cross-compatibile with other “Vitis” species, and most hybrids between the subgenera are sterile. A few, however, are at least moderately fertile, and have been used in breeding. The cultivar ‘Southern Home’, released by the University of Florida, contains both muscadine and Euvitis in its background.

Unlike most cultivated grapevines, many muscadine cultivars are pistillate, and require a pollenizer to set fruit. A few, however, such as ‘Carlos’ and ‘Noble’, are perfect-flowered, and will produce fruit with their own pollen. They may also serve as pollenizers for pistillate cultivars, as well.