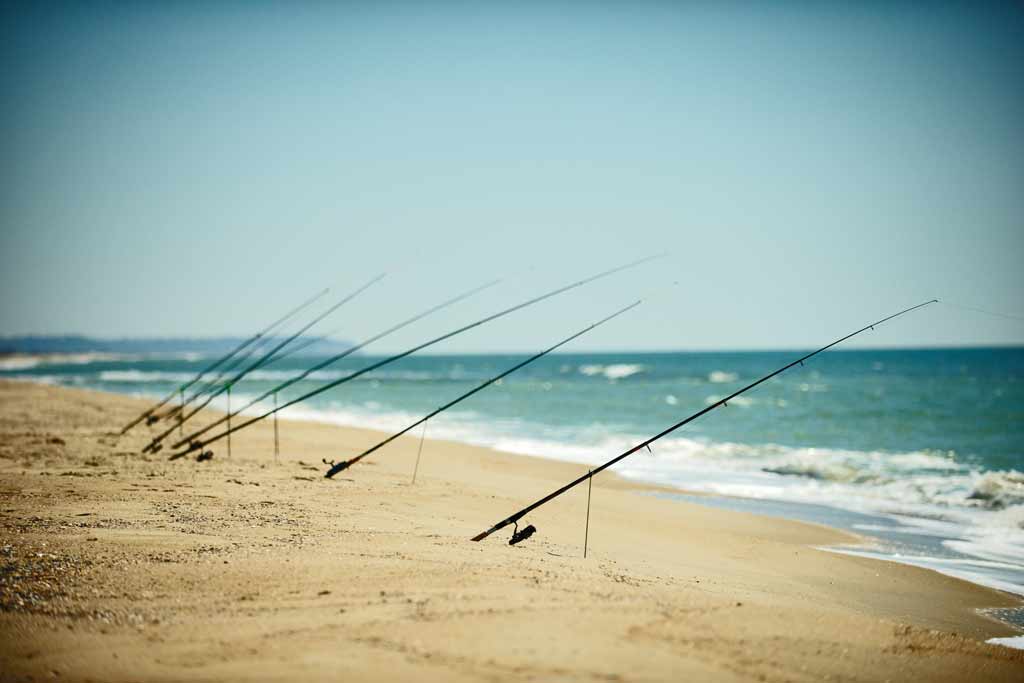 The 21 ft. bay boat makes its way into Timbalier Bay at speeds in excess of 50 m.p.h.. The driver’s eyes are hypnotically fixed ahead of the boat, scanning from side to side.

Quickly the throttle is slammed into neutral, causing those aboard to lunge forward from the abrupt change in momentum. Immediately, the skipper leaps from behind the console and onto the elevated deck at the bow of the boat.

A casting tray neatly loaded with a cast net is handed to him. With eyes still fixed to the water, he takes hold of the contraption, pitching it up and into the air. Like a parachute, the net smoothly opens to a span of some 20 ft. and lands just in front of the boat. It instantly disappears below the murky surface, lifted only seconds later with a mother lode of “‘white gold”‘ that spills onto the deck – beautiful hand-sized gulf menhaden shimmer in the early morning sunlight

To Capt. Carl Miller this is a routine occurrence. The only exception is that this particular day it took him one hour to locate his prized bait, the number one bait, in his book, for catching monster-sized speckled trout.

It does not take long to find that Miller is a man torn between two addictions. The only problem is figuring out which is most compelling, the pursuit of the bait or that which feeds on it.

“‘Sometimes it can take me all day to locate bait the size that I want,”‘ Miller says. Miller, like certain other trout anglers, knows that menhaden are probably the best bait for catching big speckled trout. However, catching bait can be an arduous task even for an experienced 10-year veteran guide like Carl Miller.

“‘I use a ten-foot net with about 161bs. of lead,”‘ Miller pointed out as he prepared the monofilament net for the next assault.

But through the years Miller has gotten the technique down to a science. Quietness is most important, that’s why Miller will use a trolling motor to approach a spot occupied by menhaden. Other times he will approach a spot at high speeds, cutting the engine off well before the schooling baits so that the forward momentum stealthily launches the drifting boat into the intended location. After verifying their presence, sporadic slaps of water customary to the species, the large and heavy net is launched by means of a specially designed casting tray that makes the job easier in such a confined area like a boat.

“‘On an overcast day this bait won’t flip,”‘ Miller complained. Miller, while hunting these baits, is constantly scanning the waters through polarized sunglasses looking for the telltale signs. “‘If a cloud passes by, these baits quit flipping, move and go deep,”‘ he emphatically stated. This is when Miller’s bait hunting task can be most tedious. He further dreads certain times of the day menhaden move deep into the marsh where you cannot get to them.

No one knows better than Miller that menhaden are infamously fragile, that is why getting them on board is only half the feat. Miller uses a round 25 gallon plastic container with two Rex-Air pumps that keep his baits alive for 3-5 hours; depending on the number of baits contained at one time.

“‘One thing about catching big trout, you gotta fish for big trout. People who catch one every once in a while – they’re fishing for small fish. There’s big fish everywhere; but you have to fish for them. If you fish for `em, you’ll catch `em. Everybody says they want to catch a big trout. But they don’t want to spend the time and the effort. You have to have the patience to do it,”‘ he explained.

Ironically, while many other professional guides resort to fishing inconspicuous locations off the beaten path, this is not the case with Miller who can be seen even on busy weekends fishing right along side other boats in his favorite territory, the barrier rocks of East Timbalier Island or Belle Pass.

“‘The main thing is to have the right bait and then look for fishable water,”‘ he says. “‘Fishable”‘ to Miller does not mean just a good tide. One of his main objectives is to find clean water. More often than none, clean water even on bad tides will yield big fish, he claims.

From springtime to late fall, Miller puts big trout consistently in the boat while others look on totally astounded. “‘At any given time there’s big fish along this beach,”‘ Miller said of the boulder jetty sporadically lining the Gulf side of the island. The once continuous run of rocks have been battered severely by storms including hurricane Andrew.

“‘Those trout get right up in those rocks and hide, waiting to ambush bait. I’ve pulled some trout out of those rocks that had bellies black as coal from dwelling so deep within those boulders,”‘ he recalls. Miller believes some of the trout are permanent residents in the rocks and for that reason form a camouflage covering for protection.

Another of Miller’s tactics is to cover as much territory along the rocks as possible as the weather heats up. According to Miller, the big fish spread out more in summer than in spring. That is why at times he will slip through select openings in the rocks to get to the back side of the barrier to fish. But he does not recommend this for novice fishermen because rock boulders lurk inches below the surface and have wreaked serious havoc on many a lower unit. He only ventures through with out drive up and trolling motor active.

Miller contends that his favorite fish, the speckled trout, are mostly sight feeders and that is why they can be caught on top water baits. This contention has made him resort to the use of invisible or clear line, particularly Berkley Big Game line in the 20 lb. class. Miller feels this line holds up the best against the sharp barnacles that infest these rocks.

Persistence is perhaps Miller’s most notable quality and one that does not come easily to most anglers in such a grueling environment. It’s not unusual for Miller to stay out all day long in the sun’s unbearable heat hunting for bait and big trout. Frequently, bait has to be pursued twice or more each day depending on how many people are fishing and how the fish are striking.

“‘These big trout don’t just come up and swallow the bait on the initial strike,”‘ he explains, casting his line out near the western end of the island. Miller’s style looks easy as he uses a bait casting reel armed with a stiff, 7 ft. rod. But do not be fooled, there is a lot more technique involved than meets the eye.

Once the line is cast, Miller allows the bait to swim on a free and slack line, usually no weight, depending on the current. If the current is moving and the fish are deep, he will add a 1/16 to 1/4 oz. split shot or rubber grip weight 2-3 ft. up from the bait; only enough to slowly bring the bait down. As he awaits a strike, the bait can be seen swimming around near the subsurface if the water is calm and clear. This is rather easy from Miller’s boat, since he has an elevated fishing platform at the bow from which he fishes.

From here he keeps a watchful eye for any fluctuation in the line while keeping his rod tip high and toward the bait. At the same time he pinches the line ahead of the reel between his thumb and index finger. When Miller feels what he describes as a catfish nibbling, he knows the trout is in hot pursuit. Rather than setting the hook as the line stretches out, Miller sort of feeds the rod out with stretched arms, waiting several seconds for the line to take off.

At that point he lifts the rod and briskly sets the hook. Admittedly, even with such orchestration and calculation the fish sometimes is not hooked, depending on the trout’s attack approach. He claims the trout will at times only bite and release the bait, in an attempt to kill it, and then turn right back around and engulf it.

Once the fish is on the line and fighting, Miller says “‘You can’t go to pulling too hard on the trout or you’ll rip his lips. You have to keep him coming from the rocks but not jerking on him. Do it gradually.”‘

Furthermore, in this finely processed technique is the type of hook used as well as the placement of it. Miller uses a no. 3 Kahle horizontal hook placed through the nose of the bait. If strikes are being missed more than usual, he will at times move up one hook size or place the hook in a different location. But he prefers not to hook them in the back, claiming the bait will out maneuver the trout, making it a harder target.

It is most amazing to see how effective menhaden of such size can drive trout, and other fish, into an uncontrollable response to strike. Even trout not much larger than the bait would come up from the deep and attempt a swipe at the inciting bait. There were numerous occasions when specks would come right to the boat if the bait was dipped over the side. It was as if the trout went into some sort of fixed trance, unhindered and unconcerned by our presence, upon catching sight of the bait.

“‘I’ve seen trout come out of those rock flats and wop! – take that bait and go right back down,”‘ Miller excitedly exclaimed. However, when the fish is not hooked, Miller immediately reels it in and examines the little baitfish behind the head for any sign of bites, which inconspicuously show up as two small pin hole punctures from the trout’s two fang-like front teeth. If that’s the case, the menhaden is immediately discarded overboard and replaced with a fresh one.

Miller’s bigger trout have been caught at night, fishing only by the light of a full moon. The protected shallow lagoons on the back side of the rocks make for good fishing, particularly during nighttime. Here, he claims, is when the big, skittish trout come out to feed, but it takes more than having the right bait.

What all of this boils down to is “‘silence is golden,”‘ especially when fishing at night. Otherwise you soon find out that shyness is not one of Miller’s traits when it comes to warning one about slamming ice chest lids or dropping things on the deck.

Like Miller says, “‘These fish don’t get this big by accident.”‘