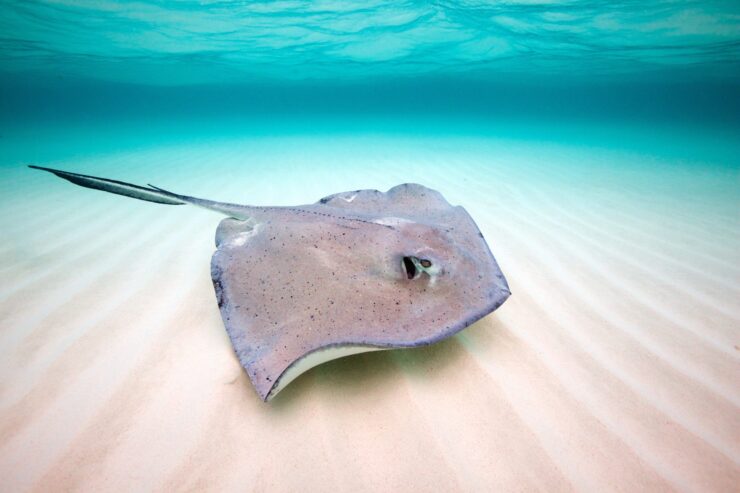 5,000 stingray attacks are reported in the United States alone each year…most incidents occur as a result of carelessness or ignorance.

That spring evening was one of the most picture-perfect days for wadefishing that one could ever ask for. With little effort, Leroy Lee and I had a beautiful mess of redfish tugging on our stringers. But little did we know that moments before sunset the scene would change into a horrifying nightmare.

The still water behind Breton Island was gin clear, and stingrays could easily be seen congregating along the sandy sea bottom. In itself, this wasn’t an unusual sight, for seeing stingrays is as much a part of wadefishing as getting wet. Admittedly, though, the sight of them did prompt us to a more deliberate “‘stingray shuffle”‘–a tactical foot movement that scares the pesky critters out of ones path.

However, shortly after moving to the back side of the northern section of the island, terror broke loose: just before sunset, while returning to the boat, Lee let out with a blood-curdling cry. From 15 ft. away I could only watch in despair as he helplessly tried to maintain balance, tossing his rod and reel and eyeglasses into the air, only to land backwards into the water with a thundering splash.

When Lee emerged, he was in excruciating pain. “‘I’ve been hit!”‘ he wailed, tears streaming down his face. At this point I knew the unthinkable had occurred–he had stepped on a stingray.

The pain was relentless and inconceivable, shocking to witness coming from a man as big and brawny as Lee. On the fringe of panic, aware that I was his only assistance, I wasted no time getting him back to the boat, though he could scarcely walk.

Once aboard and seated, I lifted his leg to view the wound, and just above the edge of his tennis shoe near the ankle, blood pumped out of a dime-sized hole like water running from a wide-opened faucet. Given the situation, Coast Guard assistance was imperative, rather than taking the chance of running back to the launch and risking further complications.

With nervous sweat rolling down my face, I contacted the Venice Coast Guard and briefed them on Lee’s condition. In no uncertain terms they informed me that “’70 percent of stingray victims go unconscious as a result of the poisonous venom,”‘ and if necessary a Coast Guard helicopter would be immediately dispatch for assistance. Upon hearing this, both of our expressions went from that of solemnness to a sobering fright.

But fortunately Lee’s condition stabilized, consequently placing a standby on helicopter assistance. But in the meantime, the Coast Guard dispatched a rescue vessel to meet up with us near the mouth of Baptiste Collette, so that Lee could be quickly taken to the nearest hospital for treatment.

stingrayIn the finale of it all, the injury kept Lee out of work for several weeks, and it was months before he could walk normally. According to his doctor, the barb almost exited the other side of his foot, just missing the Achilles tendon. Traumatized by the event, Lee claims he’ll never enter the water again.

To a person who has never been barbed by a stingray, it’s difficult to imagine the kind of pain it must take to humble a man to such lamentation, especially one noted for having high pain tolerance like Lee. Even more tormenting was the lingering question, “‘How could such an incident happen to a veteran wadefisherman?”‘

After questioning Lee on several different occasions, he reluctantly admitted that he had stumbled backwards while shuffling his feet. This is when the stingray stuck him. As sobering it may be, apparently no matter how skillful or careful or how long you’ve wadefished, anyone can become a potential victim due to factors beyond their control.

As blatant as the facts seem, this shouldn’t incite anglers to trade in all their wading gear for a good set of golf clubs, just because wadefishing poses a potential hazard. After all, I know a few golfers that have been hit in the head by flying golf balls, among other objects, and still play golf–though there’s no evidence to the rumors that both their game and thinking have improved. Obviously, it is hardly arguable that the healthy fear of any danger can serve as a protection. But in order to do so, the danger must first be identified and understood. Without question, the stingray is one species shrouded in fallacy, and frankly many anglers aren’t aware of alternative protection.

One of the biggest fallacies is that stingrays attack people anytime they’re encountered. However, evidence shows that stingrays (a.k.a. stingarees or rays) are not categorized as aggressive creatures and will avoid being stepped whenever possible. The epitome of this is seen in what takes place with rays and waders at Stingray City, Grand Cayman Island in the Caribbean Sea. Here vacationers can actually feed and swim with uncaptured stingrays that have become accustomed to people. According to Stingray City tour guides, the rays first established a relationship many years ago with commercial fishermen who regularly fed them. As a result, the stingrays, expecting to be fed, literally herd up and approach any boat that anchors nearby.

Frequently, tour guide’s and tourist are harmlessly stampeded by the rays as they enter the water to feed them. To assure onlookers that the rays are friendly, tour guides lure a ray with a piece of squid, lift it to the surface by hand and entreat those brave enough to gently stroke it. Even with such assurance, hysteria frequently erupts when herds of rays–some brandishing 5 ft. wing spans and multiple stingers–surprisingly converge on waders holding squid pieces in their hands.

Stingray barbWhile what takes place at this resort isn’t being recommended here, it’s interesting to note that these are the same species of rays that are found along our northern Gulf.

Though the stingray is basically skittish, and incidents are usually the result of carelessness or ignorance, attacks do occur more than people realize. In fact, statistics show that there are 5,000 stingray attacks reported each year in the United States alone, with injures ranging from minor stings to severe lacerations compounded by major complications that can result in paralysis or even amputation.

Records of attacks are typically documented by the U. S. Coast Guard. The incident with Lee, according to the Venice Coast Guard, was one of five over a two-month period from the same area.

Ironically, though the stingray has an effective defense system, it doesn’t retaliate on humans unless it is pinned down or its life is threatened. Even if its wings are partially stepped on, the stingray will generally flutter away without striking. This fluttering sensation is sometimes felt underfoot by wadefishermen and most often passed off as a flounder encounter, when likely it was a ray. If you doubt this based on the fact that you weren’t barbed, ask yourself how many flounders are actually seen while wadefishing? Compare this number to stingray sightings, and thank God you weren’t barbed.

Stingrays if poked, prodded or even smacked on their backs with an object, normally will not retaliate but flee off to safety. Likewise, if you are shuffling your feet and happen to nudge a ray that is lying on the bottom, its natural response is to either beeline out of the way or circle behind. Though the ray’s reaction in both cases is to avoid being stepped on, the latter maneuver can poses a problem if the wader for some reason unintentionally steps backwards–as in Lee’s case.

“‘What you see is what you get”‘ is an expression that doesn’t always apply. This is true of the stingray that seemingly has no visible stinger. But don’t be deceived! According to Dr. Bob Shipp, Ph.D. professor of the University of Alabama and authority on fishes of the Gulf of Mexico, the barb may be concealed within a sheathlike tail wrapping, depending on its size and species. The barb, or spine, according to Dr. Shipp, can grow back if broken off, and is actually a modified scale, armored with recurved serrations that are as sharp as razors. The stingray has the ability to whip its tail up over its back and strike a victim. During the strike the tail sheath covering instantly moves back to expose the barb, located about one third the way down its tail (bluntnose and Atlantic species). In some instances it can whip its tail around a victim to exert a more powerful blow.

Never underestimate the penetrating ability of a stingray’s barb, even on the smallest of rays. The ray’s barb is designed to penetrate virtually all sorts of dense materials, including wood and leather. And as unbelievable as it may seem, it’s been documented that large stingrays are able to drive a barb through a boat’s wooden planks or completely through a persons arm or leg.

According to Dr. Shipp, when a stingray strikes, it either removes its barb entirely, or breaks it off inside of the victim. When this occurs, doctors must probe the wound to make sure all particles have been removed, so the injury will not result in gangrene. In cases where the barb deeply penetrated, the wound must be enlarged to make sure it is properly cleaned.

Aside from the pain and serious laceration caused by the razor-sharp barb, which can sever arteries and possibly an Achilles tendon, a poison is released that can produce a drastic decrease in blood pressure, increased pulse, dizziness and possible shock.

While there are specific measures one must take if stung by a ray, it’s reassuring to know that protection is available for avoiding the incident altogether. Paul Perrin, a Texas entrepreneur, claims to have invented bullet-prove leg guards out of necessity after witnessing what a stingray did to one of his friends while wadefishing on the coast of Mexico. His story is quite reminiscent of what happened to me.

“‘After playing medic on a Mexican beach, I realized I was too old to go through the same thing he did,”‘ Perrin said. So after experimenting with several materials, Perrin decided to use ballistic nylon, the same material used in fabricating bullet-prove vests. The stingray leg guards, better known as Walk-N-Wade leg guards, are designed for both comfort and protection. They are constructed of two layers of ballistic cloth and one layer of nylon lining and are conveniently designed to fit over and around whatever type footwear you prefer, including waders.

For added protection, a stainless steel inner sole can be purchased to fit inside your footwear. Perrin claims that in rare cases a stingray, if its tail is stepped on, can drive its barb straight up through the bottom of your foot. Wearing both the leg guards and the sole protectors eliminate the possibility of injury from just below the knee down. Perrin claims most injuries to wadefishermen occur below the ankle.

As far as wondering if the leg guards really work, Perrin has put them to the ultimate test. As bazaar as it may seem, Perrin beached an average-sized stingray, stood on top of its back and let it strike him nearly 30 times. He walked away unscathed.

The $89.95 price tag is a small price to pay for the elimination of a lot of pain, lost wages and doctor bills.

As Perrin put it, “‘You gotta be a damn fool to go in the water without ’em!”‘

WHAT TO DO IF BARBED

If you are injured by a ray you should promptly seek expert medical help. In the meantime: