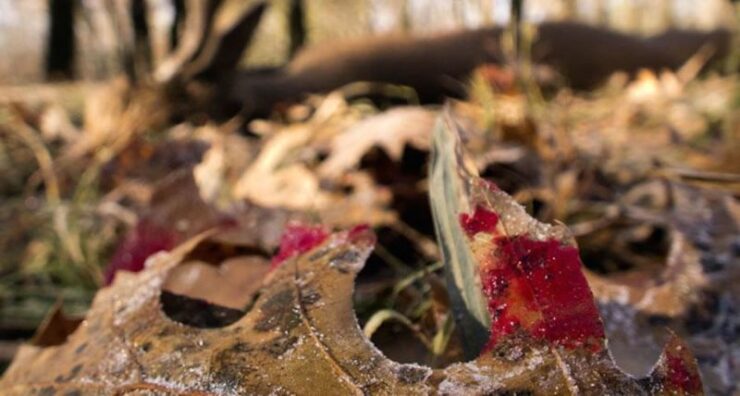 They average amount of blood in a deer or any other animal is 1 ounce of blood per # of body weight.

The amount of blood loss to affect a deer, not including any body injury, is approximately 32 ounces. Death occurs after about 45 ounces of blood loss.

Most likely animals are going to die from trauma injury rather than bleed to death. Blood loss starts after the animal is wounded and the blood trail is affected by the area it was wounded. Higher hits leave less visible trails, as the body cavity will hold large amounts of blood.

Blood droplet size varies on the amount of force used to propel it. The more impact energy the smaller size the blood drops.

High Velocity Impact Splatter caused by gunfire will leave blood drops at the site of impact about one millimeter or .03937 inches in size. Such blood drops are almost invisible even in the snow.

Do Not Be Fooled Into Thinking That the Animal Was Missed

Medium Velocity Impact Splatter caused by bow and arrow impacts will leave a droplet of almost three millimeters, but in a smaller area than gun shot splatter, but is still going to be hard to see in most cases.

From here we have a trail in many, or most cases of a running animal. Running raises blood pressure, increasing blood flowing from wounds, but it spreads this blood over a larger area.

If you have a choice, stay off the trail and away from the spot of impact for at least 30 minutes. Most unfound deer are pressured into running and also into HIDING, making for a very difficult recovery.

Stay Off the Trail!

If you walk on the trail the animal takes, you will alter or cover the blood pattern, making it even more difficult to follow.

Always walk on the side of the trail. If you have a narrow space, walk around and pick up the trail on other side of the obstacle.

Always mark your trail. Toilet paper works well, but do not use white if you can help it. Or be very careful not to wave it around making you look like a fleeing deer. If used, consider using colored toilet paper, perhaps It is made in blue or and other colors.

A pattern with lots of large drops most likely comes from the mouth, or from standing or slowly moving animals. The largest amount of blood loss is from the side of the animal that has the exit wound. Many times an animal will come to a field, road, fence, or maybe even a person, and or has a reason not to follow the trail any farther.

Then we have a trail that has a small amount of blood, then a trail of twice as much blood, and then nothing. This may indicate the animal has revisited the trail. In other words, it made a 180-degree turn and walked both directions on the same trail, then and made a cut off.

Remember animals have a tendency to try to go back to where they were before being wounded, because they were safe there. Returning to places such as Bedding areas usually traveling in curved or arcing trails.

Blood droplets are round as they fall but blood droplet shape is affected by impacting surfaces.

Blood droplets that are teardrop shaped fall onto a surface that is not flat or from a moving animal, the point on the teardrop will indicate direction of travel. Remember that a slanted or angled surface that has a slant or angle will cause tear dropping as the blood rolls or slides downward from gravity.

There is less resistance to blood traveling in a downward motion than a horizontal motion and also there is less chance of blood build up in the body cavity. Blood will not drip until there is enough gravity to over come resistance.

Lung, heart and arterial shots causes the most blood loss. Lung shots after about four to seven seconds will expel out of the mouth and nose if there is enough volume of blood in the lungs. This will make it harder to get oxygen into the body, greatly reducing lung volume, causing cramping, light-headedness, confusion and even drowning. However, within four to seven seconds, a deer can travel more than 100 yards or more.

Arterial bleeding in many cases will cause gushing and fine mist spraying, careful as this can also happen with a leg wound. Neck wounds are usually cause very heavy bleeding and a lot of side to side movement when traveling.

Transfer patterns happen when the animal rubs against things like trees, fences, grass and the ground when they fall or lie down. These are important because the animal is in panic, and may be leaning against the trees and fences or just running into them.

When they do lie down they are having trouble traveling or are hiding in these spots we find large amounts of transfer pattern blood.

After an animal had been shot STOP and wait at least thirty minutes to an hour and allow the animal to lie down and die. When an animal lies down and then moves again it finds a place with a view or scent of the trail you are traveling which can make recovery even harder. Even if the animal has been pushed it WILL LIE DOWN AGAIN SOON.

Maybe for the last time

Hunters have a hard time tracking because they keep pushing the animal into fleeing farther AND faster. Even if there is darkness or rain, there is no reason to push animals because now there is a product Bluestar®, which was developed for police to find blood, is sold in a hunting version.

Again, rarely do animals die from blood loss; they usually die from trauma. And quite often many times the blood can not even be seen. Don’t be fooled. Turn doubt into success by checking every trail with Bluestar®, it will immediately tell you if there was a hit and giving you a pattern to follow to the dead animal EVERY TIME.