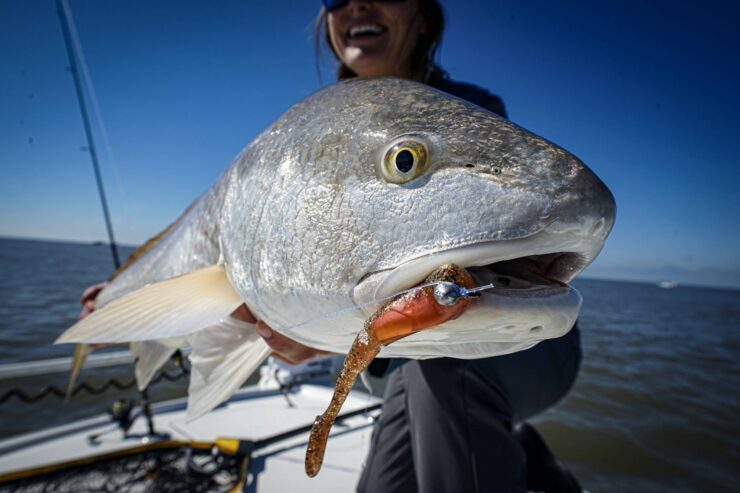 Redfish or Red Drum (Sciaenops ocellatus) also know as channel bass, bull red, or rat reds were once a popular commercially sought fish in the Gulf of Mexico as well as the Atlantic Ocean. Commercial fishing for redfish is now illegal in Louisiana. Redfish are quite easy to identify. They are redish to bronze in color with a white belly. Most have a spot on each side on the caudal peduncle which means just before the tail. They grow to a maximum size of about 90lbs in the Atlantic and 60 in the Gulf of Mexico. Young redfish often called puppy drum or rat reds and sometimes have a large number of spots on each side instead of the regular one spot.

Redfish range widely up and down the entire Louisian coast. Although they are a saltwater fish they do not require a high salinity to live; therefore they can often be caught well away from what is considered saltwater. The young redfish start their lives out in the Marshes and small lakes of coastal louisiana. As they grow in size and becomes less vulnerable to larger predators they move there residence further out. When they reach adulthood they can even be found well offshore. Redfish are a schooling fish species so once you find one there are usually others nearby.

Redfish can be caught year round in Louisiana waters. The species can be placed, like speckled trout, into two distinct groups. Winter fisherman and spring summer fisherman usually are after different age classes of fish. Some people search for redfish and specks in the coastal marshes. This group of fisherman usually catch the younger redfish that use the marsh as a nursery. Weights of fish caught usually range up to 12 pounds. Others can’t wait until Spring and Summer so they can hit the beaches, shallow rigs, larger bays, and especially the passes in search of their quarry. These fisherman often catch redfish up to 25# with occasional 35 or 45 pounders. These two groups of redfish anglers are actually targeting two different groups of redfish with obviously some overlap.