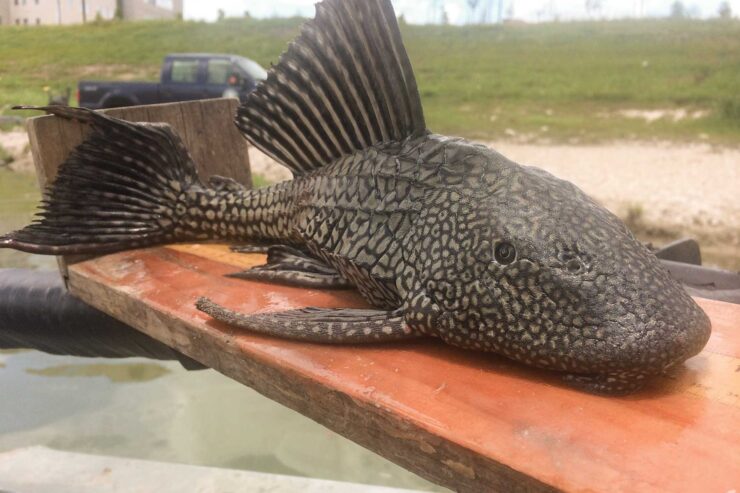 There are over 50 species of armored catfish native to the streams of South America but have become established in Florida living in steams, canals and ponds. They now occur in Florida after being release from aquariums. They don’t appear to be causing in trouble with any native species. These are small fish rarely growing larger than two foot long and they are members of the Callichthyidae family.

Armored catfish have been known to travel over land for considerable distances! They walk by pulling themselves with the pectoral fins. They have a secondary breathing system such as lungfish, gar, or bowfin do, in which air is swallowed and the oxygen from that air is taken up by a network of fine capillary blood vessels in the wall of the intestines.

Armored catfish live almost exclusively in moving water and almost never in standing water. They feed on small animals such as water fleas and small pieces of carrion. They are mostly active at night when they root around the bottom looking for food. Atleast one member of this family of catfish has a mouth that forms a sucker which is used to cling to stones and water plants. This allows the catfish to hold onto stones even in strong current while feeding on the algae from the stones surface!

Very little is known about the breeding habits of the armored catfish since even in captivity none have been seen breeding. The female will deposit as many as 250 eggs on a stone where they adhere. The young hatch on one week.