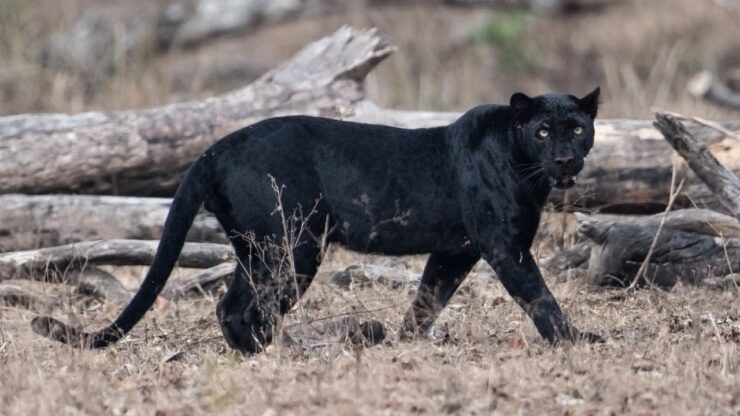 Here is another video someone sent me that was taken in Alabama, about 25 miles South of Selma. This one is amazing. Don’t know if it is a cougar as the cat is black and cougars don’t come in that color!!! Or do they??? Maybe it is a Jaguar or Leapord… those do come in black!

Curator for a natural history muesum in either Alabama or Mississippi (I forget where exactly) says that judging by the way the cat moves and looks that it is most likely a black african leopard.

The video was shot by a man and his daughter hunting on a deer lease. No fences, no game farm.

A number of people have commented on the fact that they think the black cat in the video is nothing more than a house cat. deer panther comparison I have MADE the picture below to show that this is not possible. The picture below is a combination of two different frames of the video combined to make one. One frame has the cat and the other frame has the deer. The combination of these frames into one allows for direct comparison of the deer and the panther.

As you can see the panther is considerably further away from the camera than the deer. Yet the size of the panther as directly compared to the deer without allowing for distance is already the size of a large house cat. Had the panther been close to the deers location we all know that it would appear larger and larger. There is just no way the black cat could be a house cat! They just don’t make house cats that big!